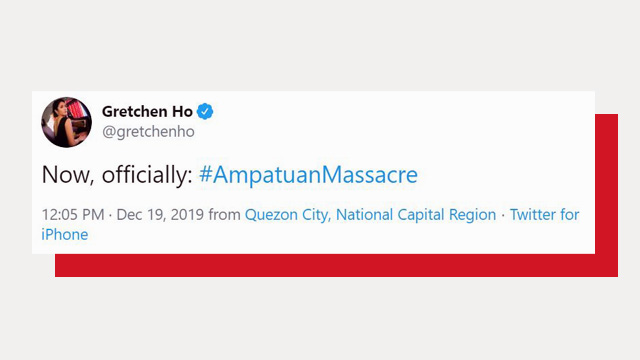 The Maguindanao Massacre Verdict Is Out; Here's What People Have to Say

Could the guilty verdict signal the end of impunity?

(SPOT.ph) November 23, 2009. More than 10 years after 58 people—32 of whom were journalists—were brutally murdered in Ampatuan, Maguindanao, the final verdict has been laid down. Zaldy and Andal "Unsay" Ampatuan Jr., sons of the Ampatuan patriarch, Andal Sr., have been found guilty of the murder of 57 people; their brother, Datu Sajid Islam Ampatuan, walks free.

The two brothers were sentenced to a maximum of 40 years in prison, as announced by Quezon City Regional Trial Court Judge Jocelyn Solis-Reyes on Thursday, December 19. More than 50 of the total 197 people accused of the murders were acquitted.

All the accused in relation to the death of photojournalist Reynaldo Momay were acquitted, according to a report by CNN Philippines. Momay's body was never found, only his identification card and dentures were ever recovered from the mass grave.

Ten years in the making, this landmark decision made waves for Filipino people. Twitter sounded off with talks about how this potentially changes the course of history, and the general noise over the guilty verdict cannot be ignored. We round up some of the thought-provoking tweets we saw:

Can you imagine waiting for 10 years?

It's only the first step.

Today was a good day, even on the other side of the globe.