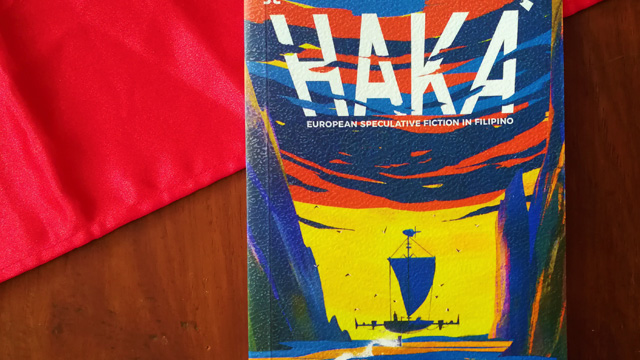 Explore questions of ethics, morality, and the future with Haka.

(SPOT.ph) The future is both a scary and wondrous thing to think about—like a permanent question mark looming over our heads. Speculative fiction is just one of the ways we humans have tried to guess at all the possibilities that lie before us, and one new book, Haka, offers Pinoys an exploration of the incredibly massive question. An anthology of European speculative fiction translated to Filipino, Haka contains stories from seasoned writers that ask everything and anything from what it would be like to be trapped in a space-time continuum to what you would be willing to give in exchange for an extra two hours every day.

The 16 stories contained in the book were chosen by Julie Nováková, a Czech author, and Jaroslav Olša Jr., former Czech ambassador to the Philippines. Olša, a former member of the now defunct World Science Fiction Association of Professionals, wanted to push for speculative fiction in the Philippines—and what better way to bring it closer to home than by publishing it in Filipino?

Within its pages, you will find translations of stories from countries and cultures that feel a world away. There are stories from the Czech Republic, Sovakia, Greece, Sweden, and more; tackling not just questions of science and the future, but also what we humans are capable of, and how much we can endure.

Nováková believes that speculative fiction has already gained ground in local literature. "I really hope that [the book] will inspire perhaps [a] new generation of authors [that will build] on [the] very vast and rich existing scene of science fiction in the Philippines," she said in a message during the launch. While the stories may be rooted in foreign cultures, they also prove that speculative fiction is universal.

Slovenian author Bojan Ekselenski—whose work Ang Utang na Panahon is included in the anthology—said in his message for the launch, "I am happy that a story written in a small European language can be found in a collection at the other end of the world." Haka goes beyond being a translation of European stories.  The people behind it hope to fan the exchange of ideas and push for an exploration of what the future means to people from all over the globe, the Philippines most especially.

Haka: European Speculative Fiction in Filipino (Anvil Publishing, 2019) is currently available through online and at National Book Store, priced at P250 each.