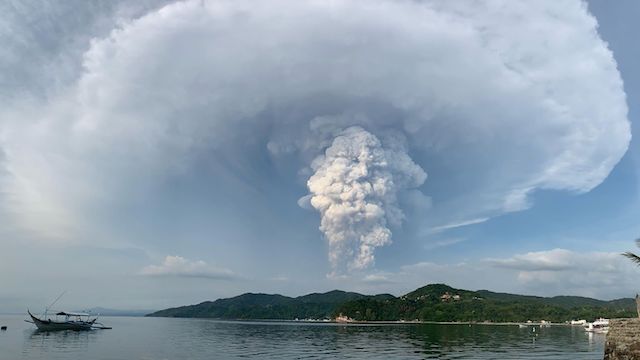 In a Nutshell: What You Need to Know About the Taal Volcano Eruption

What exactly does "Alert level 4" mean?

(SPOT.ph) All eyes are on the current severe unrest of Taal Volcano, with the main crater spewing a lava fountain at 3:20 a.m. on January 13. Resulting ashfall has reached Metro Manila, along with the areas of Batangas, Cavite, Laguna, Rizal, and Bulacan, according to an update by the Philippine Institute of Volcanology and Seismology.

The Taal Volcano is currently under Alert Level 4, according to the Philippine Institute of Volcanology and Seismology (PHIVOLCS) as of 7:30 p.m. on January 12. For Taal Volcano, this means that "hazardous eruption is possible within days." Current activity may include "intense unrest" and "low-tremor earthquakes."

While the alert level has not been raised, PHIVOLCS has already called for "the total evacuation of the Volcano Islands and high-risk areas within the 14-kilometer radius [of] the Taal Main Crater."

If the alert level is raised to the maximum of 5, then that means PHIVOLCS sees "hazardous eruption in progress," which will extremely effect "communities west of the volcano and ashfalls on downwind sectors," according to their website.

The institute referred to the fountain as "strombolian" which, much like the "phreatic" explosion that happened on January 12, didn't exactly ring a bell. According to the San Diego State University, this type of volcanic activity is "characterized by short-lived, explosive outbursts of pasty lava ejected a few tens or hundreds of meters into the air." There's no telling how long these "blasts" will go on.

The phreatic eruptions which occured on January 12, meanwhile, are "steam-driven explosions," according to the U.S. Geological Survey. No magma is released, but eruptions like these contain "steam, water, ash, blocks, and bombs."

Dealing With the Ashfall

The Department of Health has advised people to stay indoors and avoid the use of air-conditioning units. All doors and windows should be closed and can be further sealed with damp cloth. Pets are also susceptible to the ash, so they should be inside as well. If possible, we mention the stray animals in need of shelter at these times!

N95 masks, the type usually worn for construction works, are on high-demand for protection against volcanic ash. These respiratory masks are designed to have  "very efficient filtration of airborne particles," according to the U.S. Food and Drug Administration.

As of writing, stock is running low while prices for each mask have even been raised from around P30 each to P200. "Huwag naman po natin gamitin ang panahon na ito para manamantala," reminded Manila City Vice-Mayor Honey Lacuna-Pangan in a statement. If N95 masks are not available, a wet cloth will suffice, according to the International Volcanic Health Hazard Network.

Taal Volcano Eruption Taal Volcano Adventurer Savvy Seasoned Advisory Phivolcs
Your Guide to Thriving in This Strange New World
Staying
In? What to watch, what to eat, and where to shop from home
OR
Heading
Out? What you need to know to stay safe when heading out