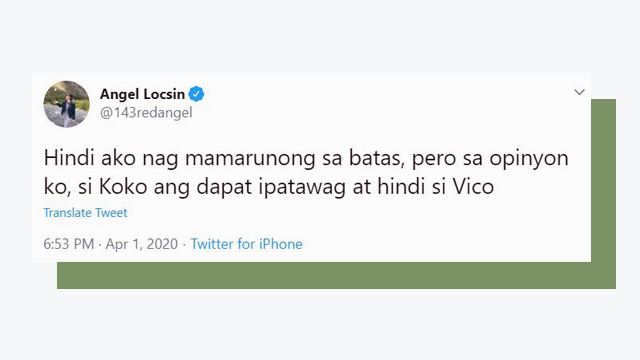 Today on Online “Trash-Talkan”: Vico Sotto Gets Support of the Twitterverse

(SPOT.ph) With no school and work to keep most of us busy, "trash-talkan" online groups are seen sprouting left and right on Facebook. These communities trash-talk one another, as if they're in a sports event where each side is rooting for their home team. There's Big Four Trashtalkan, Trashtalkan ng Mag-Ex, and even K-Pop Trashtalkan where the number-one rule is "bawal pikon." Some types of trash talk are unnecessarily offensive, but there are some burning statements that we stan. In today's unofficial government "trash-talkan," there's the National Bureau of Investigation on one side and Pasig City Mayor Vico Sotto on the other.

The anti-graft division of the National Bureau of Investigation (NBI) on April 1 summoned the mayor for possible violation of the Bayanihan to Heal as One Act. The directive, which was enacted into law on March 25, gives "emergency powers" to President Rodrigo Duterte to ensure that all local government units are "acting in line with the rules, regulations, and directives issued by the National Government." According to NBI deputy director Ferdinand Lavin, Sotto is being asked to explain his side for allegedly disobeying the national government policy in suspending all modes of transportation following the imposed community quarantine that started on March 16.

This comes after Sotto begged the national government to exempt tricycles from the mass public transportation ban, citing how difficult it is for health workers and patients to travel from one place to another within the city. "Pa'no na rin po kung magkaroon ng emergency, lalo na sa mga lugar na tricycle lang ang kasya?," he pointed out in a Facebook post on March 18. This plea was rejected by the Palace. "May jeep ka or may multi-cab ka or four-wheel vehicle, either sa iyo or makihiram ka sa constituents mo or something," Secretary Karlo Nograles said in a press briefing on the same day.

Sotto immediately complied; and by March 20, Global Electric Transport partnered with the local government to roll out two COMET electric vehicles to offer free rides for health workers and city personnel. And for those places that can only be reached by tricycles? City Hall asked for bike donations for health workers, to which concerned citizens and private organizations immediately responded.

It’s been weeks since the matter in question was resolved, and Pasig City has already moved on to providing mobile kitchens for frontliners, setting up a “mobile palengke.” Meanwhile, Sotto’s tweet on April 1 about the issue was short and sweet: “We complied with all directives. Hindi po illegal magbigay ng opinyon...at alam kaya nila na March 24 naging batas ang Bayanihan Act?” The 1987 Constitution of the Philippines prohibits ex post facto laws.

People on Twitter were quick to express support for Sotto as #ProtectVico landed on the top spot in Twitter’s global trending topics (read: global).

Other tweets pointed out what the other mayors and public officials are doing. Here are some statements wearing the #ProtectVico badge:

Is this the last straw?

This meme just goes with everything.

Well. Look at that.

This is how millennials do it.

Even celebrities are chiming in.

Vico Sotto Twitter National Bureau Of Investigation Covid-19 News Covid-19 Pasig Adventurer Savvy Seasoned Trending New Normal Opinions
Your Guide to Thriving in This Strange New World
Staying
In? What to watch, what to eat, and where to shop from home
OR
Heading
Out? What you need to know to stay safe when heading out