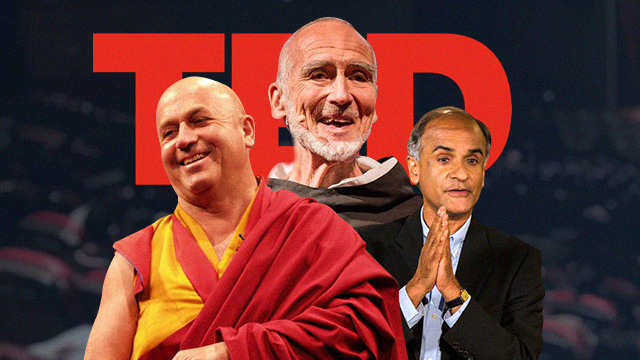 As Taylor Swift would say: "Hey, are you okay?"

(SPOT.ph) If there's one thing that we know from watching or reading the news, it's that it takes two seconds for headlines to cause your blood pressure to shoot up. But, hey, what can you do when you want to stay informed anyway? Here's one answer: Take a break not only to recharge physically, but also spiritually. TED Talks has featured plenty of speakers that can help you find your inner Zen. Here are some of our picks.

Check out this list of TED Talks that can calm your nerves:

"The World's Most Boring Television...And Why It's Hilariously Addictive" by Thomas Hellum

In just 18 minutes, Norwegian television producer Thomas Hellum explains the emergence of slow TV, which started gaining popularity in the late 2000s. It's exactly what it is: a television program of boring events, including a seven-hour journey on the national Belgian railway that goes from western Norway to eastern Norway. The whole "event" was recorded and broadcast for the entire seven hours (plus 17 minutes) with up to 1.2 million Norwegians watching it on a normal Friday.

"Photos That Give Voice to the Animal Kingdom" by Frans Lanting

There's nothing like vibrant images of wildlife to make you think about the vastness of the world, moreso, of the universe. In this short 2014 TED Talk by nature photographer Frans Lanting, he presents an encounter with a tribal leader on an island off the coast of Vancouver. The Kwikwasut'inuxw people, as they are called, believe that all animals on Earth are one and the same despite their physical differences.

"The Art of Stillness" by Pico Iye

Travel writer Pico Iye, who considers himself a "lifelong traveler," reveals that the best way to appreciate your journey is "by going nowhere." He argues that sitting still lets one sift through the overwhelming experience of going from one place to another and allows one to reflect on the future and the past. This is especially useful in this age of technology, acceleration, and distraction.

"In Praise of Slowness" by Carl Honoré

If you can't stay still, then at least you can take things slow. Journalist Carl Honoré advises people to follow the speed of their "inner tortoise." He advocates the "Slow Movement" which is now being applied to different areas of people's daily lives. Europe, for example, is pushing for a decrease in working hours—an idea that people have observed to be improving their quality of life.

"All It Takes Is 10 Mindful Minutes" by Andy Puddicombe

"When was the last time you did absolutely nothing for 10 minutes?" asks Andy Puddicombe in his 2012 TED Talk. The mindfulness expert suggests that you spare 10 whole minutes a day to refresh your mind and be present in the moment—no texting, no playing games on your phone, no thinking about your future and past, and no worrying about the tasks you have left to do.

"The Habits of Happiness" by Matthieu Ricard

In one way or another, we all just want to be happy—and we seem to be spending a lot of energy and time getting there. Buddhist monk Matthieu Ricard has one solution: train our minds to achieve a sense of well-being. This, according to him, is not just a pleasurable sensation but "a deep sense of serenity and fulfillment."

With everything that you have to do every day, the seemingly logical solution to tick off everything on your list is to multitask. You check your e-mails on your laptop while standing in front of the stove and with the television tuned in to the evening news in the background. If you really want to push it, you may even be talking to someone on the phone—hands-free, of course—while doing all these. Paolo Cardini, in his TED Talk, presents his design for a monophone "to downgrade our super, hyper-mobile phones into the essence of their function." This is really just his way of saying you should try your best to focus on just one task, despite the multitasking world.

"Want to Be Happy? Be Grateful" by David Steindl-Rast

David Steindl-Rast, a monk and interfaith scholar, believes that the first step in achieving happiness is by being grateful. "It is not happiness that makes us grateful. It's gratefulness that makes us happy," he explains. Living gratefully, according to him, is all about living in the moment as if every second is a gift. With this in mind, you can find happiness in every drop of water or every gust of wind, every sunrise and sunset, and every minute that you’re alive.

While we all know that we're not at our best when we're stressed, we still tend to go that route when we're swamped with our very long to-do lists. Stress, as it turns out, causes our brains to release cortisol, which then clouds our judgment. We forget little things, border on mediocrity, and sacrifice a lot of personal time just to get through a busy work day—only for everything to turn into a disaster. Daniel Levitin suggests doing a pre-mortem, which—as you guessed—is the opposite of a post-mortem for all the things that can cause you stress.

"Glorious Visions in Animation and Performance" by Miwa Matreyek

Multimedia artist Miwa Matreyek's clip is more of a performance rather than your usual TED Talk. She combines shadow play, meditative music, and cool animation projections for around 10 minutes to calm you down. It's a good watch when you want a escape to a dream-like space.

Ted Talks Streaming Free Things To Do Adventurer Savvy Seasoned Guide Evergreen
Your Guide to Thriving in This Strange New World
Staying
In? What to watch, what to eat, and where to shop from home
OR
Heading
Out? What you need to know to stay safe when heading out