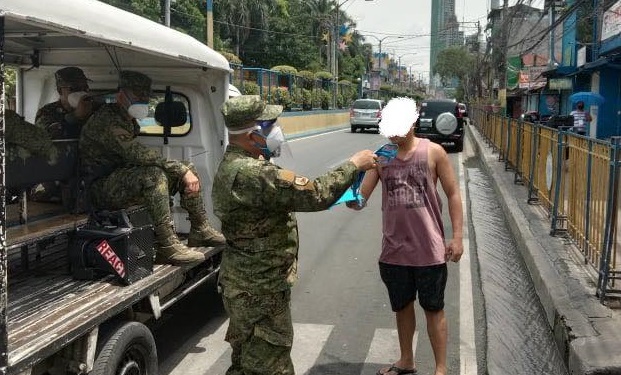 Mandaluyong vs. Quezon City: A Tale of Two Quarantine Violators

It involves a face mask and happened in a span of 24 hours.

(SPOT.ph) Two different people violated the quarantine rule that requires wearing a face mask when outside—one in Quezon City and another in Mandaluyong City—in the span of around 24 hours. How these people were penalized, though, show very different styles: one was beaten up then arrested, and the other was given a verbal warning then provided a free face mask.

We're sure you've seen the video of fish vendor Michael Rubuia being beaten up in Quezon City by barangay officials. The 38-year-old fish vendor was allegedly without a quarantine pass or a face mask. It took around five men and what seems like a bit more force than necessary to get him into the service vehicle. "Ngayon lang ako nakakita sa buhay ko na daig pa sa kriminal 'yong pinagtutulung-tulungan nila. Palo, padyak hindi naman lumalaban ang tao," an unnamed witness told ABS-CBN.

Meanwhile, an unnamed quarantine violator who was spotted walking along the streets of Barangay Addition Hills in Mandaluyong City without a face mask was subjected to very different treatment. According to a Facebook post by the
Mandaluyong City Disaster Risk Reduction and Management Office, an Army reservist assigned to the area, stopped the said violator, gave him a verbal warning, and handed him a face mask. End of story. This happened barely a day after the Quezon City incident.

Face masks are now mandatory when out in public, as announced by the Inter-Agency Task Force on April 2. Local governments are expected to enforce the measure in their own respective areas.

Adventurer Savvy Seasoned Quezon City Mandaluyong City Covid-19 Covid-19 News
Your Guide to Thriving in This Strange New World
Staying
In? What to watch, what to eat, and where to shop from home
OR
Heading
Out? What you need to know to stay safe when heading out