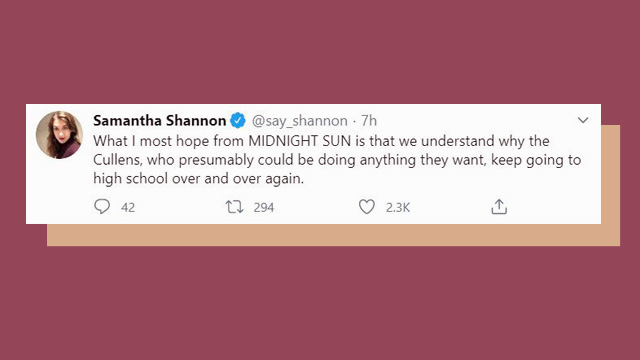 Twitter Is Losing It Over the New Twilight Saga Book

Who else feels like they waited 84 years for Midnight Sun?

(SPOT.ph) Break out the eyeliner and your old Team Edward/Jacob shirts—we know you still have them—Stephenie Meyer is back with a new Twilight book! The author announced the release of Midnight Sun, a retelling from Edward Cullen's perspective, scheduled on August 4 . A countdown on her official website ended with a preview of the book's cover and a letter from the author—which thousands of fans across the globe tried vainly to access after the site crashed moments after.

The new book draws on the myth of Hades and Persephone; you know the one, basically a kidnapping, but romantic, apparently. "This unforgettable tale as told through Edward’s eyes takes on a new and decidedly dark twist. Meeting beautiful, mysterious Bella is both the most intriguing and unnerving event he has experienced in his long life as a vampire," the Publisher Little, Brown was quoted as saying in a report by The Guardian.

Whether you were obsessed with the Twilight world or not, it's impossible to have been able to ignore the Meyer fantasy—and the fact that the first chapters of Midnight Sun were leaked online in 2008. The author has held a grudge since and been unable to finish the book, until now, that is.

Fans were understandably absolutely wrecked by the announcement. Most of Twilight's original readers have all grown up. As Meyer wrote in her letter, "I’m not the same person I was then. My children have all grown up. My back got weird. The world is a different place." This new Twilight book will hopefully offer some solace in these strange times, she added. And trust us, Twitter has been on fire since the announcement. Check out some of the funniest and wildest reactions we saw:

The YA house's foundation is as solid as Edward's glittery abs.

Fingers crossed our parents haven't thrown those shirts out.

Time to load up on eyeliner.

We all needed to know the truth!

Everyone else on Twitter: What the hell is happening?

Let's keep words to a maximum of three syllables, please.

You have been warned.

Honestly, what was happening in this scene?

Imagine all the other, actually cool stuff they could have done with their time.

Adventurer Savvy Seasoned Twilight Stephenie Meyer Midnight Sun Reads
Your Guide to Thriving in This Strange New World
Staying
In? What to watch, what to eat, and where to shop from home
OR
Heading
Out? What you need to know to stay safe when heading out