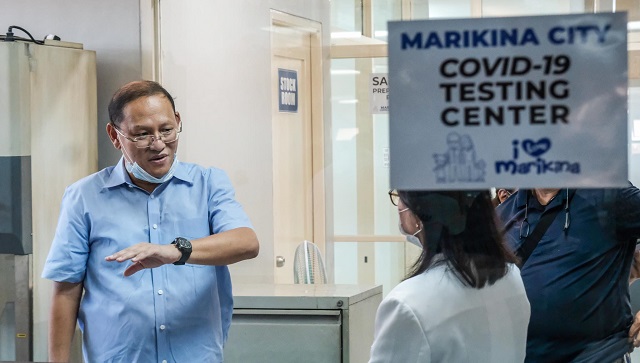 With Marikina City leading the pack.

(SPOT.ph) Marikina City is slowing down the spread of COVID-19 faster than any other Metro Manila city. Based on data from the Department of Health as of May 8, it takes 8.32 days for the infection rate to double in the country's shoe capital—which puts Marikina City and six others under the "deceleration" phase of an outbreak. The other cities effectively slowing down the rate of transmission are Caloocan City, Malabon City, Pasig City, San Juan City, Las Piñas City, and Pasay City.

"Sa Marikina City naitala ang pinakamabilis na pagbaba ng kaso ng COVID-19 sa buong Metro Manila," declared the city's Public Information Office on May 10. Marikina City mayor Marcy Teodoro attributed the slow rate of infection to "the massive efforts of the city government such as the thorough disinfection and aggressive contact tracing using Marikina’s link map," according to a Manila Bulletin report. There are a total of 126 confirmed cases in Marikina City as of May 10.

In contrast, the fastest doubling rate was recorded in Quezon City where it takes an average of 5.69 days; There are 1,524 confirmed cases in the city as of writing. Navotas City, Valenzuela City, Taguig City, Makati City, Manila, Mandaluyong City, Muntinlupa City, and Parañaque City are still classified by the Department of Health (DOH) are also under the acceleration phase of the breakout.

In total, the DOH recorded an average of 4.87 days before cases in Metro Manila double—which means the rate of transmission in the National Capital Region is still accelerating. Of the 10,794 cases recorded nationwide as of May 10, more than half—6,993, to be exact—are in Metro Manila.

The table of breakout phases per local government unit was presented to the Metro Manila mayors during the May 9 virtual meeting to discuss a possible extension for the enhanced community quarantine.

Adventurer Savvy Seasoned Marikina City Covid-19 Covid-19 News New Normal Opinions
Your Guide to Thriving in This Strange New World
Staying
In? What to watch, what to eat, and where to shop from home
OR
Heading
Out? What you need to know to stay safe when heading out