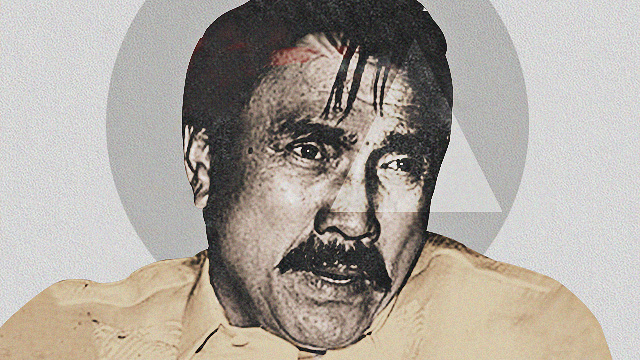 (SPOT.ph) Ramon Revilla Sr., has passed away, as announced by his son Senator Ramon "Bong" Revilla Jr. on his Facebook account on June 26. The former senator was 93 years old, according to a CNN Philippines report, and has been confined in a hospital since March.

While Revilla Sr.—whose real name was José Acuña Bautista Sr.—made his mark in legislation, he will most arguably be remembered as the silver screen legend "Hari ng Agimat." Before he turned to politics, Revilla Sr. starred in a slew of films where he portrayed characters—based on real-life Filipinos, from mythic heroes to urban legends—who were unbeatable thanks to the mysterious powers they harnessed from anting-anting, or amulets, that they held.

Revilla Sr.'s big break came in 1972 when he portrayed Leonardo Manicio, a notorious gangster—better known by his alias Nardong Putik—in the film Nardong Putik: Kilabot ng Cavite. Both actor and gangster were from Cavite, where the belief in amulets is particularly strong. Nardong Putik wreaked havoc in the 1950s and famously credited the amulets he carried for helping him escape justice multiple times.

The next year, he starred in another popular film with a similar storyline, Pepeng Agimat... Sa Daigdig ng Kababalaghan, effectively stamping him in Filipino pop culture as the "King of Amulets." Revilla Sr. continued to star in films throughout the '80s and '90s, which centered around the power of the agimat. The stories became so popular that in 2009, ABS-CBN came out with Agimat: Ang Mga Alamat ni Ramon Revilla, a TV series based on some of Revilla Sr.'s most popular characters.

In the televised series, Gerald Anderson played Tiagong Akyat, a character based on Santiago Ronquillo, a notorious outlaw in the 1920s. Anderson's character has super human abilities thanks to an amulet. In Tonyong Bayawak, Coco Martin plays a human being with the characteristics of a bayawak. Elias Paniki starred Jake Cuenca as a witch hunter, while Revilla Sr.'s grandson, Jolo Revilla, took on his classic role as Pepeng Agimat, a slayer of aswangs.

Adventurer Savvy Seasoned Ramon Revilla History Philippine Cinema
Your Guide to Thriving in This Strange New World
Staying
In? What to watch, what to eat, and where to shop from home
OR
Heading
Out? What you need to know to stay safe when heading out