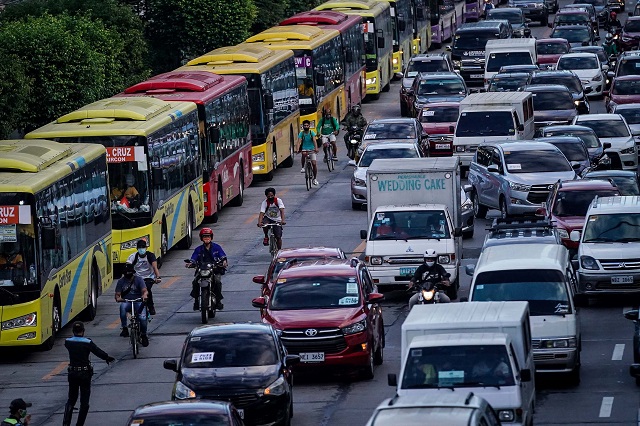 (SPOT.ph) Love them or hate them, buses are an integral part of EDSA—and while we've gotten used to seeing them on the outermost lanes (a.k.a. the designated "yellow lanes"), a new system is being tested. Interim operations of the EDSA busway begin today, July 1, according to the Department of Transportation. So you can expect to see commuter buses taking the innermost lanes of EDSA, with some exceptions.

This new "busway" will eventually have buses utilize EDSA's innermost lanes throughout, with stops located at existing train stations and footbridges. In the meantime, interim operations have been set up to aid commuters traveling under the general community quarantine, said the Department of Transportation (DOTr). A total of 550 buses are expected to ply the busway; an initial 150 units start today. No fare increase has been allowed.

This temporary busway route has been set up from Monumento in Caloocan City all the way south to the Parañaque Integrated Terminal Exchange and vice versa. Check out the official route below:

From Monumento to Quezon Avenue, bus stops will remain at the curbside "for the meantime," said the DOTr:

From Quezon Avenue to Estrella, buses will shift to the innermost lanes using the "partial operability of the busway section."

Upon exiting Estrella all the way to the Parañaque Integrated Terminal Exchange (PITX), buses will be allowed to use curbside stops again:

Curbside stops will be allowed while the needed infrastructure for the proper busway stations in the innermost lanes is being constructed (i.e. lighting, fences, and canopies). There are 16 stations along EDSA in the works, with 12 soon to open according to a Philippine Star report. Some of these will utilize existing MRT-3 platforms to help commuters get to the center lanes of EDSA.

Concrete barriers will also be set up along EDSA's median lanes to separate the busway. A total of 36,000 concrete barriers were bought by the DOTr for this purpose. Delivery begins this July and is expected to be complete by August or September 2020.

Adventurer Savvy Seasoned Commuting City Life Department Of Transportation Traffic Edsa
Your Guide to Thriving in This Strange New World
Staying
In? What to watch, what to eat, and where to shop from home
OR
Heading
Out? What you need to know to stay safe when heading out