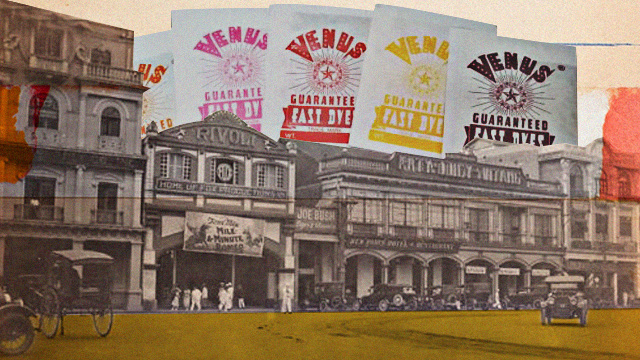 Why Do We Call Tie-Dye Powder "Dyobos"?

Find out who Joe Bush was.

(SPOT.ph) In the past couple of years, we’ve seen the return of the tie-dye trend in all its psychedelic glory. Some of you may have even started DIY-ing tie-dye shirts, face masks, wraps, and whatever you can get your hands on at home—all thanks to those five-peso fabric dye packets that you ordered online. But there was a time when these sachets were easily available in sari-sari stores, and we called them dyobos (after the brand Joe Bush)—even when the brand was Venus or Sunshine. Yes, it’s one of those Colgate-na-Close-Up tales.

Joe Bush was an American who started a laundromat and dyeing service at 129 Plaza Sta. Cruz, Manila back in 1899, according to FilipiKnow.net. “Take that Stain to Joe Bush”—his slogan read, but the dyeing service became much more popular in the 1920s. Eventually, the shop was named “Joe Bush Dyer and Cleaner,” which also sold dye powder in paper sachets. The packaging became so popular that even when other brands of dye powders came out, Filipinos still called them dyobos.

Writer Butch Dalisay mentioned in his column in 2004 that a reader had pointed out the connection between Joe Bush and dyobos, which led him to speculate on whether the famed Joe Bush was the same one who played in U.S. Major League baseball: "I didn’t know that about Joe Bush, and barring any evidence to the contrary, I’m going to have to believe it. I’d have to wonder, though, if Joe Bush the Manileño didn’t have anything to do with Joe Bush the Major League pitcher who played for the Philadelphia A’s and a couple of other teams before being released by the New York Giants in 1927. The fictionist in me can easily imagine a World Series player, down on his luck, arriving in pre-war Manila and starting a whole new life in a new trade. But 'Bullet Joe' Bush died in 1974 in Florida at age 81, with no mention of the Philippines or shoe dyes in his obituary."

Eventually, other brands overtook Joe Bush, including Venus Fast Dyes, which is still around today and more widely available. Apart from powdered dyes, Venus became popular for their enamel chalk products. You probably saw boxes of it being used by your teachers back in the '80s and '90s.

You could say Venus Fast Dyes has outlived Joe Bush Fast Dyes. Still, even with a renewed interest in it among a younger generation of would-be tie-dye fans, it'll probably always be known as dyobos.

Joe Bush Tie-dye History Nostalgia Adventurer Savvy Seasoned
Your Guide to Thriving in This Strange New World
Staying
In? What to watch, what to eat, and where to shop from home
OR
Heading
Out? What you need to know to stay safe when heading out