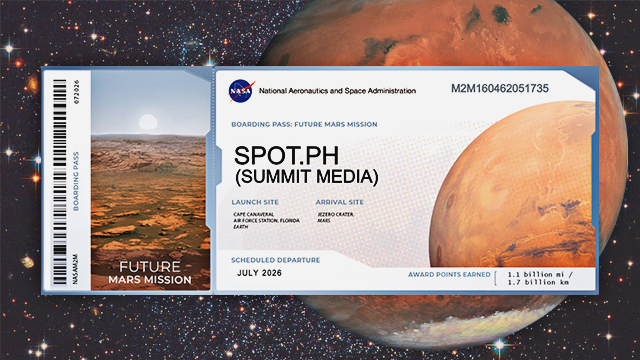 Book Now: Here's How You Can Get a Boarding Pass to Mars

Or at least for your name.

(SPOT.ph) With everything that's been happening today, we don't blame you if just want to leave Earth ASAP. But while that's not really possible just yet, the next best thing is to send our names to another planet like Mars. We can revel in the fact that at least this compound of letters representing ourselves made its way more than 55 million kilometers away from where we all are right now. This once-in-a-lifetime opportunity is made possible through National Aeronautics and Space Administration's "Send Your Name to Mars" campaign.

This isn't the first time that the space agency sent names to the red planet. On March 16, up to 10,932,295 names were "stenciled by electron beam onto three fingernail-sized silicon chips" that were attached to an aluminum plate aboard the Mars rover named Perseverance. Right beside the chips is a laser-etched graphic illustration depicting Earth and Mars sharing the same light from one bright star. The anodized plate will be visible to cameras, which will start broadcasting images to Earth.

Perseverance has a mission to look for signs of ancient life and collect rock and oil samples. It is set to launch anytime today, July 30 from the Cape Canaveral Air Force Station in Florida, and is expected to land on Mars' Jezero Crater on February 18, 2021. The next scheduled departure with a new set of names is in July 2026. It has more than one million "seat reservations" to date.

You also get a boarding pass when you sign your name for the campaign. This also lets you keep track of all the missions you've participated in (or will be participating in), and get the chance to be one of the campaign's "Frequent Flyers." It's much like the airlines' loyalty programs, except that the flight is a mission to mars and the passenger is just your name.

National Aeronautics And Space Administration Nasa Mars Space Science Adventurer Savvy Seasoned
Your Guide to Thriving in This Strange New World
Staying
In? What to watch, what to eat, and where to shop from home
OR
Heading
Out? What you need to know to stay safe when heading out