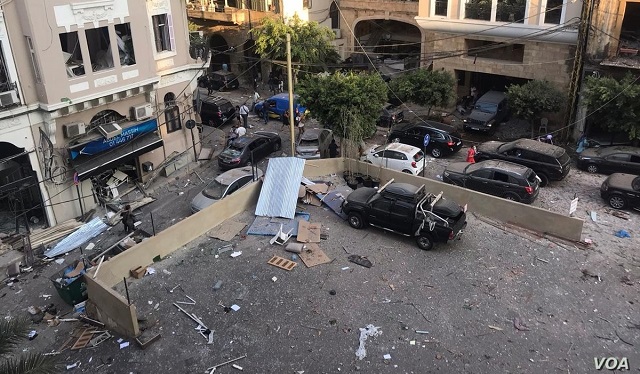 Fast Facts: What Happened in Beirut?

Huge blasts have rocked Lebanon's capital. We lay down the facts.

(SPOT.ph) We are more than halfway through 2020 and the year just keeps getting worse. If you woke up today to news that huge explosions have rocked the city of Beirut, Lebanon's capital, and can't make sense of the information overload on your screens, then we round up all the important facts and numbers you need to know.

A major fire broke out near the city's port, followed by a massive explosion at around 6 p.m. Casualties are reported to be at at least 78 people while around 4,000 were injured by the blasts. A major Beirut hospital, Hotel Dieu, received around 400 patients, according to a CNN report. Buildings as far away as 10 kilometers from the site suffered damage.

Better shot of the Beirut explosion. from r/PublicFreakout

Huge smoke billows from the fire near the port area before a massive blast occurs. Shockwaves are clearly seen in footage from the incident, shaped similarly to a mushroom cloud usually associated with nuclear explosions.

An estimated 2,750 tons of ammonium nitrate, an agricultural fertilizer that becomes explosive when exposed to open flames, were being kept at a portside warehouse according to a statement by Lebanese Prime Minister Hassan Diab. The "highly explosive material" was confiscated years earlier and had been stored in the area since 2014, said General Security chief Abbas Ibrahim. Although it has not been confirmed that this is the exact cause, officials say the explosive substance may be linked to the incident.

The Prime Minister has since stated that those responsible for the explosion will be held accountable. "Those responsible for this catastrophe will pay the price," he was quoted as saying by Al Jazeera. Earlier, he said that the Lebanese customs should be questioned as to why the dangerous substance was being stored in the area.

Diab has called for a two-week long state of emergency should be enacted following the blast.

Two Filipinos were confirmed to have died in the blast, said the Department of Foreign Affairs. Six have also been reported injured, but the Philippine Embassy to Lebanon says there could be more. All eight were in their employers' homes when the explosions happened.

Around 33,000 Filipinos are currently in Lebanon, according to department numbers, with 75% in the Greater Beirut area.

How You Can Help

Several initiatives have been set up to help the people of Lebanon. You can donate to the Lebanese Red Cross or the Disaster Relief Fund and help spread the word on the situation. The COVID-19 pandemic continues in the country as well with 5,062 cases according to the Johns Hopkins global tracker.

Adventurer Savvy Seasoned Beirut Global News
Your Guide to Thriving in This Strange New World
Staying
In? What to watch, what to eat, and where to shop from home
OR
Heading
Out? What you need to know to stay safe when heading out