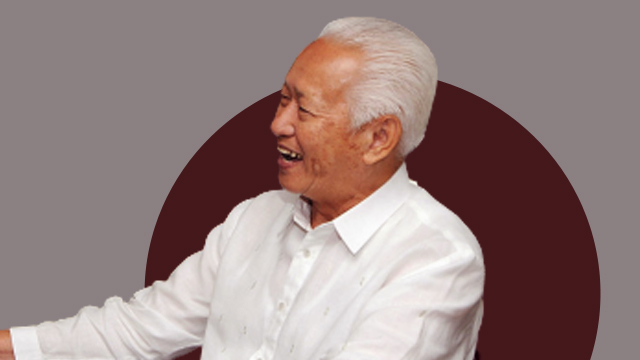 "The Law Applies to All, Otherwise None at All" + Other Memorable Quotes From Alfredo Lim

The former Manila mayor passed away on August 8.

(SPOT.ph) Alfredo Lim, former mayor of Manila City and senator, passed away on Saturday afternoon, August 8. This was confirmed by his daughter Cynthia Lim to CNN Philippines. He was 90 years old.

This unfortunate news came a day after reports that the veteran politician is in a hospital after contracting the coronavirus. In a statement on August 7, his former chief of staff said that Lim was "very much alive" and "making good progress."

Here are some of his most famous quotes during his time as a public servant:

"The law applies to all, otherwise none at all"

This was one of the former Mayor's leading mantras as the chief of Manila's local administration. You might remember the "shame campaign" he led during his term from 1995 to 1998 to push back on drug pushers and users; his tough stance on criminality earned him the nickname "Dirty Harry."

The confident "Dirty Harry" had this to say when asked which of them is his closest competitor for the seat of Manila mayoralty in 2019. The competitors in question were then Manila Mayor Joseph Estrada and former Vice Mayor Isko Moreno—the latter of which would win the elections that year.

Way back in 2013, several Manila city officials were arrested for allegedly engaging in illegal gambling—including then Vice Mayor Isko Moreno. By the time Lim supposedly learned about the arrest, the Vice Mayor was already in jail. The two were then in opposing political parties but Lim denied any ulterior motives to the arrests.

Manila Alfredo Lim Covid-19 Covid-19 News Obituary Adventurer Savvy Seasoned News
Your Guide to Thriving in This Strange New World
Staying
In? What to watch, what to eat, and where to shop from home
OR
Heading
Out? What you need to know to stay safe when heading out