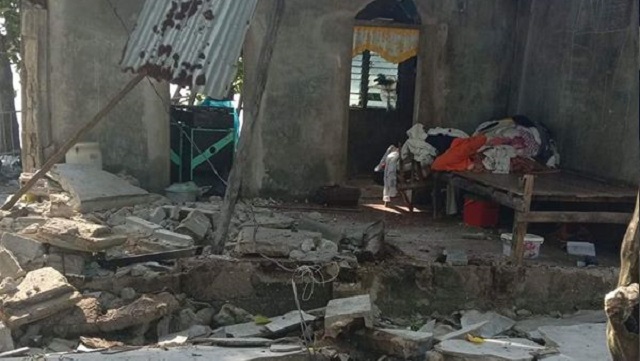 LOOK: Scenes From Around Masbate After Magnitude 6.6 Earthquake

The quake damaged homes, buildings, and roads across the province.

(SPOT.ph) The earthquake that rattled the municipality of Cataingan, Masbate on the morning of Tuesday, August 18 was felt in Visayas and all the way to parts of Luzon. It was a 6.6 magnitude earthquake, according to the Philippine Institute of Volcanology and Seismology with 21 aftershocks as of 11 a.m.

One casualty has been reported: Gilbert Sauro, a retired policeman, died after his home collapsed in Sitio Alimango, Barangay Concepcion. Several others were injured after the shaking caused structures to fall. Different intensity levels— which measures the effects of the shaking while magnitude measures the energy (using seismographs)—hit several areas in Visayas and Luzon according to the Philippine Institute of Volcanology and Seismology (PHIVOLCS). Cataingan was at the highest recorded Level VII.

Following the quakes, pictures of extreme damage in Cataingan and surrounding areas surfaced online. The Philippine Red Cross posted pictures taken by their Masbate Chapter showing roofs that caved in and entire walls that have collpased to the ground. Debris is scattered everywhere.

In Cataingan alone, the list of fallen or damaged structures include the Public Attorney’s Office building, the old and new Cataingan public market, and the Cataingan police station.

Cracks also appeared on roads in Masbate. Damages to streets and buildings were reported across the island, confirmed the Office of Civil Defense in Bicol in an Inquirer report.

The tremors were felt all the way to Iloilo. This video uploaded to the Facebook page of Barangay Sta. Monica, in Oton, Iloilo, shows a light fixture swaying in a chapel as they hold morning services. PHIVOLCS recorded an instrumental intensity level IV in the city of Iloilo.

ADVERTISEMENT - CONTINUE READING BELOW
Hot Stories
You Might Have Missed