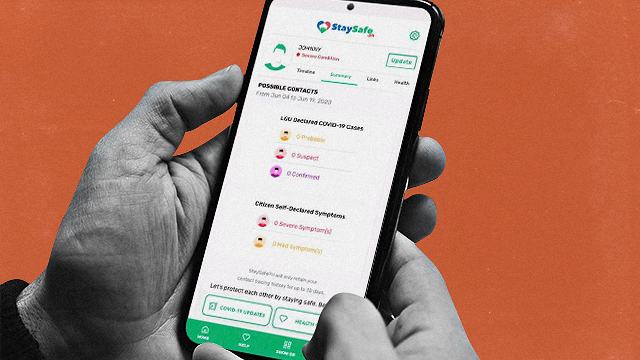 The government has sanctioned different ones.

(SPOT.ph) Remember when there was a suggestion to make your chismosa neighbors contact tracing warriors? Well, we can hopefully leave that behind now that several actual contact tracing apps have been launched in the Philippines. In fact, given how many there are, it's hard to tell which one we should be using. There is the StaySafe.ph app, recently launched by the national government, and its semi-twin, the TraceFast app, as well as the Department of Tourism's monitoring platform, SafePass.

What is the StaySafe.ph app?

StaySafe.ph was first rolled out in April but was officially launched on September 3. You might remember having received a prompt on your phone to download it? This contact tracing app was made by local company Multisys Technologies Corporation and is being promoted by the government as a means to help the economy. “We want all the Filipinos to use it, so we will have uniform application,” said Palace Spokesperson Harry Roque.

The app will "build public confidence to use these facilities and help rev up the economy," COVID-19 testing czar Vince Dizon told ABS-CBN. The app and online platform is free to use and will require you to register your information, as well as possible symptoms. The app will alert you if there are suspected or confirmed cases in certain areas, as well. Plus, instead of filling out health declaration forms before entering establishments, you can use it to scan a QR code.

Several privacy concerns have been raised about StaySafe.ph, with IT expert and former Department of Information and Communications Technology Officer in Charge Eliseo Rio Jr. calling the app "borderline spyware," according to the Manila Bulletin. Data collected through the app is stored in the Department of Health’s database, with Dizon noting that only the government will have access to the information.

The StaySafe.ph app was launched by the government in partnership with 11 companies, listed below. You can expect the app to be in use in several establishments, including the SM Supermalls and Robinsons Malls.

If you frequent Ayala Malls, you can also use their rewards app, Zing, to download and fill out a digital contact tracing app. Just don't forget to take a screenshot of the final page to show the guard before entering!

Available for iOS, Android, and online

Multisys developed another COVID-19 contact tracing app called TraceFast, which is endorsed by both the Department of Health (DOH) and the Inter-Agency Task Force. It works through the Google-Apple Exposure Notification API, a framework and specification tool used for digital contact tracing developed by the two companies during the pandemic. It is currently only available for iOS users.

For now, TraceFast is only available for iOS users

The Department of Tourism also launched a digital monitoring platform to help establishments keep up with COVID-19 restrictions. Aside from helping with basic contact tracing, the platform has other features to aid big and small businesses.

There are digital health forms, employee management features, and more necessary information on the pandemic. Plus, the program is free for government agencies and establishments accredited by the Department of Tourism (DOT).

The Philippines has so far launched three different platforms, and that's where the confusion starts. Notwithstanding privacy concerns that have been raised, StaySafe assures users that they are not required to input real names when registering, and whether you trust the government with your data is up to you; downloading the app is optional at this time. You can also use the TraceFast app if you're not comfortable with releasing your data, but this one does appear to rely heavily on the number of people using it for the notifications to come in, besides being currently limited to only iOS users.

Looking into how other countries have approached their contact tracing would help: Singapore has found that Trace Together—which was built on the same Apple and Google contact-tracing framework as TraceFast—has not been effective, and in comparison to Australia's CovidSafe, New Zealand's NZ COVID Tracer falls short in several aspects, including efficiency and comprehensiveness.

The bottom line? The more contact-tracing apps users have to choose from, the less effective they're likely to be.

Adventurer Savvy Seasoned Government Covid-19 Covid-19 News Tech Mobile Apps Summit News Summit News Feature Greener
Your Guide to Thriving in This Strange New World
Staying
In? What to watch, what to eat, and where to shop from home
OR
Heading
Out? What you need to know to stay safe when heading out