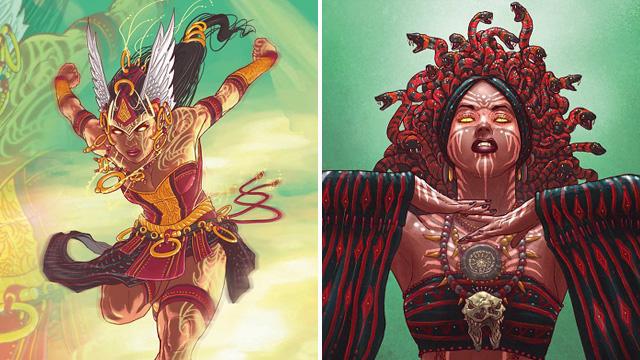 Yup, the sequel to Salamangka is here.

(SPOT.ph) We Filipinos live on stories. As with any culture, our myths, legends, tales and what-have-yous are a huge part of who we are. One proof of just how vast and varied the Pinoy mythos is can be found in Ian Sta. Maria's graphic novel Salamangka. If you fell in love with the wondrous universe he created in his first book, then you best mark your calendars because Salamangka 2 is coming out this month! It will be available in both digital and print formats through The Philippine Readers and Writers Festival—which is going online, BTW—from September 28 to October 4.

Salamangka 2 will have a total of 50 illustrations to pore over: mystical gods, spirits, monsters, mortals, the in-betweens, and the outliers. Whereas the first book was more of an "introduction" into the world of Salamangka, the second "dives deeper into that world and tries to connect all those characters under one endless blue sky. Imagine all those stories happening in one shared universe," comic-book artist Sta. Maria tells SPOT.ph in an online exchange.

The book also takes inspiration outside of Philippine folklore. "This time, I fully embraced the Dungeons and Dragons vibe," he says, explaining that he took a lot of elements from different fantasy genres. You can also spot a little a bit of influence from the Viking era, (the artist currently works with LEGO at its headquarters in Denmark) and even a bit of Pokémon ("Because my officemates keep bugging me to get into the card game"). Sta. Maria explains that in effect, the second book "became an amalgamation of Filipino mythical characters and other cultures in the world."

And yet even as the Salamangka universe expands, Sta. Maria still keeps the core of Philippine mythology intact. In the pages of Salamangka 2 are "female warriors inspired by Darna," says the artist. These figures started out "as fan art and costume redesigns [that] became individual characters with their own stories."

"I always loved the old epic tales of Rajah Sulayman and I borrowed elements from those stories and melded them with these new female heroes," shares Sta. Maria. So he ended with several different tributes to the unbeatable superheroine, each one inspired by different peoples and stories across the Philippines.

Perhaps the most important introduction made in Salamangka 2 would be of the Salamangkero itself. "It’s so weird to introduce a main character in a sequel, but here we are!" jokes Sta. Maria. "This character was inspired by the Crypt Keeper from Tales from the Crypt, an old horror anthology series."

Sta. Maria worked with several others for the second book, which he describes as "people I always wanted to work with on a project." This includes his younger sister, Adrienne Sta.Maria; poets and storytellers Patricia Ramos, Michelle Manese, and Motzie Dapul; award-winning copywriters Jao Bautista and Meggy de Guzman; and more. Get ready to dive into an ever-expanding magical world!

Salamangka 2 (Summit Books, 2020) will be launched at the 2020 Philippine Readers and Writers Festival happening online from September 28 to October 4. It will be available on Summit Books' shops on Lazada, Shopee, and Shopify; and in leading bookstores nationwide.

Adventurer Savvy Seasoned Salamangka Ian Sta Maria Reads
Your Guide to Thriving in This Strange New World
Staying
In? What to watch, what to eat, and where to shop from home
OR
Heading
Out? What you need to know to stay safe when heading out