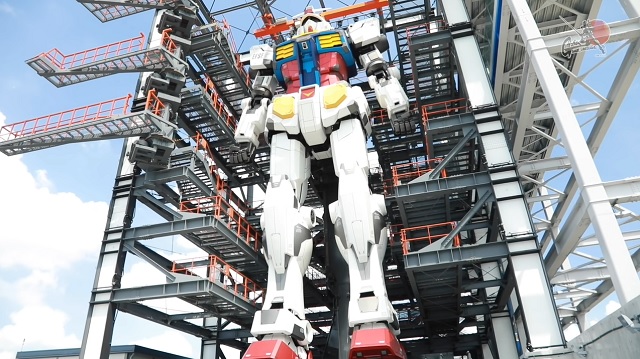 LOOK: A 60-Foot Gundam Comes to Life In Japan

(SPOT.ph) Here's another cool place to put on your bucket list, especially if you're a mecha fan. We're sure you have heard whispers of a full-sized Gundam robot being built in Japan and trust us, it is very much real! A giant robot from the 1979 anime Mobile Suit Gundam, specifically the OG RX-78-2 Gundam, is taking shape over at the port city of Yokohama, where a Gundam Factory is set to open sometime this year—oh, and yes, it moves.

The gigantic animatron showed off its moves in a recent video that circulated online. You can see it move its arms and feet—and even take a knee! It weighs around 25 tons and stands 18 meters tall, which is around 60 feet, BTW. Can you imagine how cool it would be to stand on the platforms and watch the giant mecha come to life?

This attraction has been in the works since 2014, according to CNN, and was initiated as part of the Global Gundam Challenge. It will be the main feature of the upcoming theme park Gundam Factory Yokohama.

The park is currently under development at the Yamashita Pier and will house an entertainment complex with cafés, shops, and exhibitions on everything and anything Gundam, according to Kyodo News. It was originally set to open on October 1, but has been postponed due to COVID-19. "We expect to have our grand opening within the year," said a statement on their website.

Meanwhile, you can keep track of the Gundam's development through the factory's YouTube channel and website! They regularly post updates and vlogs about how the mecha is being made.