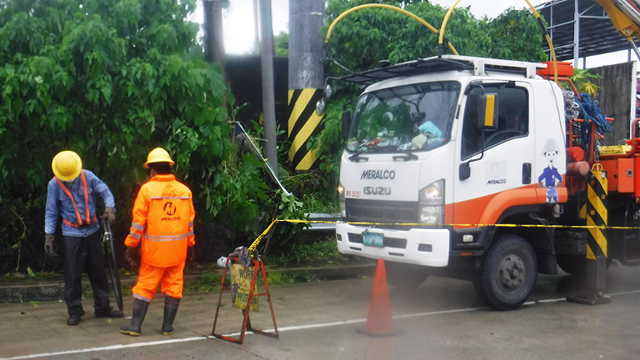 But it's nothing compared to damages to the rest of Luzon.

(SPOT.ph) It was a rough night for most residents of the Southern Tagalog Region and Metro Manila as typhoon Ulysses made its first landfall in the islets of Quezon off the coast of mainland Luzon at November 11, 10:30 p.m. Electricity was out for most parts of both regions as strong winds damaged utility poles and cables.

Posts on Twitter showed a wider blackout as people continue to try to get the attention of @Meralco online. As of 5 a.m., up to 56% of their customer base have been affected.

A resident in Makati City accidentally captured on video what seems to be an explosion of a utility pole.

Strong winds, on the other hand, toppled over utility poles in Taguig City.

Lampposts along Macapagal Boulevard in Pasay City are switching on and off.

Live wires have been spotted in Laguna.

Meralco is already on full alert and working to restore power in these areas as soon as possible. It's important to note that they can't do it all at once, especially with the dangers of the ongoing typhoon.

In most parts of Bicol Region, especially the whole island of Catanduanes, power has been out since the onslaught of super typhoon Rolly. Not to mention ravaged homes and casualties. And a whole night of blackout is nothing compared to that.

UPDATE (November 12, 12:30 p.m.): In a virtual presser by Meralco, spokesman Joe Zaldarriaga said that they've reduced the count of the number of customers without power from 3.8 million at 5 a.m. to 2.5 million at 10 a.m. The most number of affected customers is in Metro Manila. They can't say yet when power will be completely restored as flooded communities continue to pose a challenge for them. "We will not restore power in areas that we deem dangerous, both on the part of our line personnel and our customers," Zaldarriaga added.

Ulysses Typhoon Metro Manila Adventurer Savvy Seasoned City Life Hard News
Your Guide to Thriving in This Strange New World
Staying
In? What to watch, what to eat, and where to shop from home
OR
Heading
Out? What you need to know to stay safe when heading out