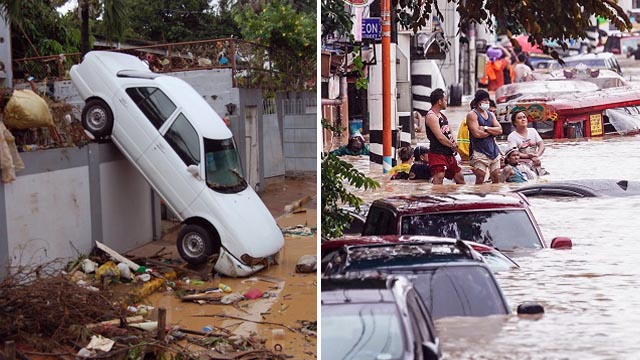 PHOTOS: A Look Back at Ondoy's Onslaught

Ulysses' aftermath has drawn many comparisons to the 2009 typhoon.

(SPOT.ph) Typhoon Ulysses made landfall on November 11, Wednesday, bringing torrential rains and howling winds to Luzon. By the time the clouds finally cleared on November 12, practically the entire eastern side of Metro Manila—from Bulacan all the way south to Cainta, Rizal, was submerged in floodwaters. With hundreds stranded on rooftops and calling for rescue, the aftermath has brought back memories of another devastating typhoon: Ondoy in 2009.

Ondoy landed on a Saturday, September 26—with no one prepared for the month's worth of rainfall it dumped across central Luzon in just 12 hours.  While Ulysses only carried about a third of Ondoy's rainfall, the continuous beating from the previous Super Typhoon Rolly, and storms Quintana, Siony and Tonyo, contributed to the massive destruction we just felt, according to reportr.

In both cases, Marikina was arguably the worst hit. Ulysses surpassed the water levels experienced during Ondoy, with local goverment reporting a peak of 22 meters high at 10:33 a.m., November 12; Ondoy reached a maximum of 21.5 meters.

Ulysses was most felt in the same areas Ondoy wreaked havoc in 11 years ago. We look back to Ondoy's aftermath, as well as pictures from the ongoing rescue efforts.

There were around 78 reported casualties in Marikina during Ondoy—58 or so from Provident Village alone. At least 140 deaths were reported from the 2009 typhoon. Below are pictures taken during the rescue efforts in Provident Village after the height of Ondoy in 2009, and scenes from around Marikina on November 12, 2020.

Rizal was also one of the most affected areas by both storms. Folks from Montalban and San Mateo flooded Twitter with calls for help and clips from the floodwaters that swept through the area at the height of Ulysses. Below are photos from Cainta, Rizal, a few days after Ondoy's onslaught, with floodwaters still remaining. Ulysses' devastating effects are clearly seen in Barangay Banaba, San Mateo, Rizal, with floodwaters still several storeys high on November 12.

Outages across Metro Manila left millions of households without power for nearly 24 hours—but the lack of electricity is the least of people's problems. As of the latest reports, the Ulysses death toll has reached 26, with 25 injured, and 14 still missing. More than 25,000 people were affected in the regions of  Cagayan Valley, Cordillera Administrative Region, CALABARZON, and MIMAROPA with around 14,000 of those individuals now in evacuation sites. No official numbers yet from Metro Manila, Bicol, and Central Luzon as rescue efforts continue, nearly two days after Ulysses first made landfall.