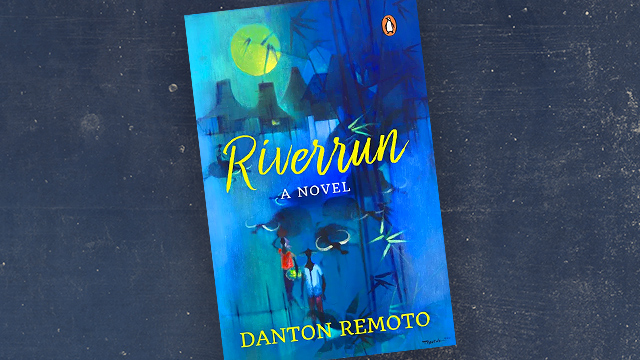 (SPOT.ph) [Ed's note] Riverrun, A Novel, was recently published by Penguin Random House SEA and Danton Remoto, award-winning writer, has sent us his fun, funny account of how it came about, in a list called 10 Things You Didn't Know About Riverrun, A Novel.

He wrote the first draft of the novel in April 1993, in Hawthornden Castle, a 17th-century castle inhabited by the ghost of Fiona Cunningham. Fiona, a commoner, was supposed to marry Lord Drummond, the owner of the castle. But she was found dead—by poisoning—three days before the wedding. Fiona haunted Boswell Room, the room where Danton was assigned to stay for a month.

He wrote the novel in longhand on yellow pad paper because the rent for electric typewriter was P200 per day, a big amount in 1993. He later read one chapter, on yellow pad paper at the Cambridge Conference on Contemporary Literature at Downing College. After he finished reading, the Latinos asked him “for the Spanish original” of his novel, while the Eastern Europeans teased him: “You’re just like us. You also make fun of your country’s history.”

He submitted the novel to the Palanca Awards in the 1990s but it lost. The head of the three-person jury said that Riverrun “had no ending and did not deserve to win.”

Afterward, Danton submitted this novel to a Philippine publishing house. The publisher hired a literary critic who said, “There is a fantasy chapter in the middle of the novel and it does not work. It should be taken out.” Danton just withdrew the novel and did not follow the suggestion of the literary critic.

Twice rejected, he kept the novel under his bed for 20 years, until Anvil asked him to turn the book into a Young Adult novel. He followed this suggestion and took away the chapters on gay love and longing. But Rayvi Sunico, a poet and Danton’s teacher in Philosophy at Ateneo, said it doesn’t work as a YA novel. Danton restored the deleted scenes. Sunico also helped Danton rewrite the ending of the novel with his suggestion to watch the film, The Summer of ’42.

The Philippine edition of Riverrun, A Novel was finally published in October of 2015, along with three other novels, as part of the Philippines hosting of the Asia-Pacific Writers and Translators conference of that year. It was launched to a full house at the Conspiracy Bar on Visayas Avenue.

One thousand copies of the novel were printed and it sold well in the first year. Unfortunately, it was hardly found on the book shelves afterward. Sales trickled.

Danton became Head of School, English, at the University of Nottingham in Malaysia in 2017. In 2019, fellow writer Noelle Q. de Jesus told him that Penguin Random House South East Asia is looking for fiction manuscripts, so he sent his novel.

He prepared himself for a long wait, but they emailed him the next day saying they are interested, but how should the novel be sold? So Danton sent a comprehensive marketing plan for the novel in Asia, the U.K. and the U.S. They also asked him to add not one, but two sex scenes to balance the pining and longing in the novel. Danton willingly obliged, but turned one chapter into a satire on sex.

Riverrun, A Novel was slated for a book launch last April in Singapore. Danton also had book launches and signing sessions scheduled in Malaysia, the Philippines, Indonesia and the United Kingdom. However, Covid-19 derailed all these plans. The novel was published in August to rave reviews. The U.S.-based bookriot.com hailed it as “one of the five most anticipated books by an Asian writer for 2020.”

And finally, Riverrun, A Novel will be launched at the Manila International Book Fair online on Wednesday, December 2, at 2 p.m. The novel that lost in a contest and that nobody wanted to publish has gained a global platform. And the 57-year-old Danton Remoto is simply smiling from ear to ear, like the Cheshire cat in Alice of Wonderland.

Reads Staying In Danton Remoto Books Savvy Seasoned Lgbt Lgbtq
Your Guide to Thriving in This Strange New World
Staying
In? What to watch, what to eat, and where to shop from home
OR
Heading
Out? What you need to know to stay safe when heading out