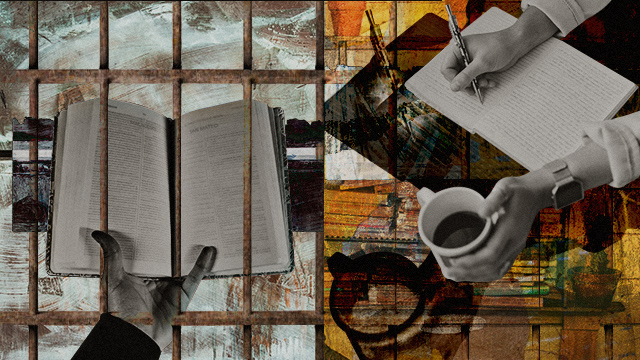 Handwriting Her Many Days

What is it like to be confined to a space that's 5-by-8 square meters?

Her space is all of five to eight square meters. There is a single bed, and at its foot is a Monobloc table, her work desk where she handwrites all of her days. There are piles of books, of many genres: mystery novels, legal and political thrillers are her own favorites; fantasy, memoirs, historical and literary fiction are gifts from many friends brought when they visit or sent through her staff. There also are tons of documents: updates, committee reports, transcripts, drafts for proposed bills and resolutions, and arguments to charges lodged against her person, her womanhood actually.

She was arrested the day before the 31st anniversary of the 1986 People Power, and for no crime as all the court hearings would show no real evidence or reason for her to be in prison, four years running. Sociological studies have long established how especially for women political activists, prison is a site of humiliation and family separation because women are stigmatized more deeply than the men and their bonds to their families are so much tighter.

The unkindest cut of all for Senator Leila was when her request to attend her son’s graduation from law school (May 2018) was not granted. Not granted too was her appeal to visit her gravely-ill sister-in-law, wife to her youngest brother Vicboy. She passed away recently; Senator Leila did not get to bid her goodbye and console her brother, the shyest of the siblings, but who after her arrest stepped up to appear in public, grant interviews, deliver speeches on his sister’s behalf, and even run marathons to be able tell the world his sister is innocent.

She wonders if her father, one-time COMELEC Commissioner Vicente de Lima, Sr. who molded her to be principled and strong, ever imagined she would be in prison. Her angels are her older son, Israel, and grandson, Brandon, both special children with autism, and spared of the pain and separation. Her mother, Norma, was not told of what befell her, only that she was out on trips and assignments. She finally got to visit Senator Leila at the PNP Custodial Center at Christmas of 2018, almost two years after her arrest. Now 88 years old, and shielded by dementia, she does not fully grasp the painful reality.

In the early pandemic lockdowns, Senator Leila did not get to see anyone, not even her staff for almost seven weeks. When the scheduled one-hour thrice-a-week visits resumed, they were limited to her immediate family, doctors, lawyers, spiritual advisers, and select staff. She has had four Christmases in detention, which pre-pandemic managed to be happy occasions with family, some friends, and staff. They would gather in the small receiving area, remember only
the untroubled times, and before the CCTV, as there were no cameras or gadgets, would sing together, swap stories, and simply cherish one another’s company. Weekly masses were joined by some guests, followed by a simple lunch. Fr. Robert Reyes, her spiritual adviser, called them Parokya ni Leila. Since the pandemic, however, it has just been one family member and the priest for an hour every Sunday.

Senator Leila reads voraciously and says friends have enriched her taste in books.

Lately, the list has been a great mix of the Obama memoirs, Ruth Bader Ginsberg’s My Own Words, Elie Wiesel’s Night, George R. R. Martin’s A Clash of Kings, Ziblatt’s and Levitsky’s How Democracies Die, Bishop Ambo David’s The Gospel of Mercy According to Juan/a, Ed Garcia’s Courage, Julie Berry’s All the Truth That’s in Me, and Randy Ribay’s young adult novel Patron Saints of Nothing. Here, Filipino-American Ribay tells the story of Jay who goes back to Manila to find out how his cousin was mistakenly killed in the drug war.

Though the custodial staff (her guards) are courteous and treat her professionally, her mantra in solitary detention is taken from Ben Stewart’s title—Don’t Trust, Don’t Fear, Don’t Beg:The Extraordinary Story of the Arctic 30, a fast-paced account of the 30 Greenpeace activists who tried to stop Putin from drilling oil in the Arctic, and were jailed in a Russian prison.

She immensely enjoyed reading Bill Browder’s Red Notice: A True Story of High Finance, Murder, and One-Man’s Fight for Justice, a gift from journalist Marites Vitug. A crime thriller and political memoir, Browder was a Wall Street maverick whose investment adventures brought him to Russia, where he exposed corruption, barely escaped, and managed to pass the Magnitsky Act in the United States to avenge the torture and death in a Russian prison of his lawyer, Sergei Magnitsky.

Her staff has turned into some kind of book club as she shares what excited her about her last read, and as they too talk about theirs. They exchange among them more and new titles to read.

Known for being a notorious workaholic, even in detention she works tirelessly. Without a laptop, a cellphone, nor internet, Senator Leila painstakingly writes every piece of draft and instruction, prints it out and passes it back and forth through her Executive Assistant who sees her once a week for an hour. Even when senate sessions have gone online, teleconferencing they call it, Senator Leila is not allowed to participate in plenary sessions and committee hearings. With the aid of her able and efficient legislative staff, she files her bills, proposes resolutions, and asks her colleagues to co-author the bills. Through written manifestations, she recommends amendments to pending bills and interposes interpellation questions. To fulfill her committee assignments, she carefully pores over thick draft reports and signs concurrence or dissent.

She has showed up for all her court hearings, and always upbeat whenever she does, waving to crowds outside the Muntinlupa Hall of Justice or the Quezon City Metropolitan Trial Court. After ten online hearings facilitated by the PNP Custodial Center in coordination with her legal team, Senator Leila, strictly observing health safety protocols, was again able to physically resume attending court hearings. The first was on February 9, and then on February 11-12 for 24-hour routine tests at the Manila Doctors. On February 17, she was acquitted of one of the three charges against her by Judge Liezel Aquiatan of the Muntinlupa Regional Trial Court (RTC) Branch 205.

On top of the work, Senator Leila keeps a journal and handwrites her thoughts and feelings for most of the days. These have been collected into three books published by her staff as Dispatches from Crame. She is handwriting everything down as there has to be a way of wringing out good from bad. A way to tell the stories as the universe is made up of them, more than atoms.

Since their compound was enclosed, she has not been able to walk for exercise, but without fail she does her daily chores: tidy up her cell, sweep her quarters, feed her family of stray cats, water the plants, and take out the trash. But for 90% of her almost 1,460 days in detention, she reads, she works, and handwrites—it is pure life of the mind: restless, questioning, keeping safe precious memories, analyzing new ones before making them, and configuring how and when the social reset, certainly the crest of the pandemic tidal wave, will push societies hard off their boards.

The crisis, as always, Senator Leila knows, is the proverbial test for heart-wrenching difficult decisions, yet empowers us with hope for all kinds of possibilities.

Leila De Lima Staying In Adventurous Savvy Seasoned
Your Guide to Thriving in This Strange New World
Staying
In? What to watch, what to eat, and where to shop from home
OR
Heading
Out? What you need to know to stay safe when heading out