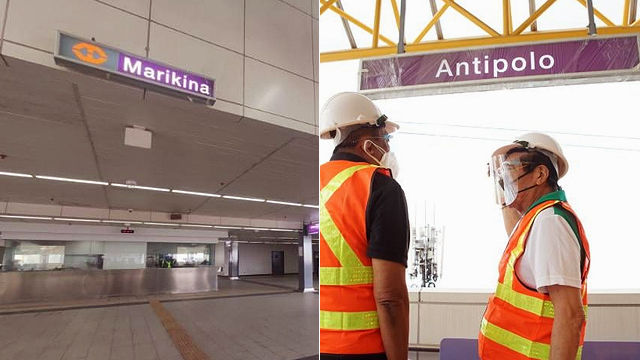 (SPOT.ph) After so many delays, commuters in Metro Manila can finally see some relief when the Marikina and Antipolo Stations of the Light Rail Transit Line 2 open on June 22. It's expected that this will cut down travel time from Manila City to the eastern side of the Metro to just 40 minutes, according to the Department of Transportation, instead of the usual three-hour drive or bus and jeepney ride.

The Light Rail Transit Line 2 (LRT-2)'s east extension, which adds four kilometers to the existing railway, starts from Santolan Station, runs through Barangay Roque in Marikina near Sta. Lucia East Grandmall, then ends in Barangay Mayamot in Antipolo near SM City Masinag. Groundbreaking for the first phase of the project, which is the construction of a viaduct, was held in June 2015; the groundbreaking for the two stations was held in May 2017. After six years, the LRT-2 Marikina and Antipolo Stations are finally up and running.

LRT-2 just resumed full operations on January 22, 16 months after the Anonas, Katipunan, and Santolan stations closed due to a carriagway fire in October 2019. The estimated damage from that incident was at P428 million.

Heading Out City Life Infrastructure Commuting LRT-2 Marikina Antipolo Adventurer Savvy Seasoned Train Hard News
Your Guide to Thriving in This Strange New World
Staying
In? What to watch, what to eat, and where to shop from home
OR
Heading
Out? What you need to know to stay safe when heading out