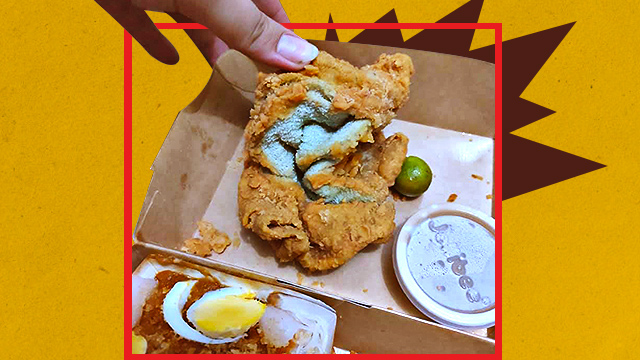 Everyone's Talking About #TowelJoy: Here's What Went Down

Can we ever look at Chickenjoy the same way again?

(SPOT.ph) Jollibee has announced that their Bonifacio Global City Stop Over branch will be closed for three days starting June 3—following that #TowelJoy incident. We know you've seen it on your feed by now: that crisp and juicy-looking fried cutlet that turned out to be a towel. If you're finding a mistake this big hard to believe, well, we're here to confirm that it looks to be very, very real.

On Tuesday, June 1, a Facebook user under the name Alique Perez took to the social media platform to share the, erm, strange Jollibee meal that was delivered to them from the Jollibee Bonifacio Stop Over branch via GrabFood. As they tried to cut up the chicken for their son, they felt something was very off—only to find out they were trying to cut up a battered, deep-fried towel.

"This is really disturbing... How the hell do you get the towel in the batter and even fry it!?!?" wrote Perez. "I really thought that the post complaining about weird stuff in their orders were just all made up, now I know that it really happens! So disgusting and embarrassing." The post contained pictures of what's now been dubbed on the Internet as "TowelJoy" as well as a screen capture of their GrabFood order.

Perez asked for help from the GrabFood rider who went back to the branch and reported what happened. The TowelJoy was eventually replaced with another  Chickenjoy with Palabok Solo—the real thing this time, we hope—while their order, a four-piece Chickenjoy Family Box Solo, was not replaced.

Perez ended her post with the same thoughts everyone is now having. "Now I can't even think of the other ChickenJoys na kasama while frying this," she wrote. "The essence of the towel contaminated the oil and the batter from the supplier so how many ChickenJoys are affected?"

Understandably, the disturbing incident shook many Jollibee-loving Pinoys to the core. Perez's post has been shared around 80,000 times as of writing, with nearly 90,000 reacts.

Nearing midnight on June 2, Jollibee posted their official statement regarding the incident to their social-media pages. The Stop Over branch was ordered to close for three days from June 3 "to thoroughly review its compliance with procedures and retrain its store team to ensure that this will not happen again."

"Deviations from Jollibee's standard food preparation procedures occurred on the part of certain personnel" from the "franchised store."

They reiterated that "Jollibee has carefully developed and complied with food preparation systems to ensure that we deliver excellent quality products and customer satisfaction," and promised to continue doing so.

There was no direct mention of the TowelJoy or any explanation offered as to how that towel ended up there. Based on the statement, it seems that chicken pieces are battered and fried in-store, but that can't be verified.

Not the First Time

Unfortunately, this isn't even the first time people have found truly unexpected things in their fast-food faves. Back in 2019, journalist Bernadette Sembrano's husband found a cockroach in his Yi Fang drink—which he apparently almost swallowed, said Sembrano on IG.

And back in 2011, director Sigrid Andrea Bernardo was involved in a brouhaha with the old Chic-boy restaurant after she ecountered a caterpillar in her Ginisang Kangkong. After being given the run-around at the restaurant, she took to social media to complain about it via a funny "break-up letter"—which management didn't take too well, threatening to sue for libel. Talk about customer service.

Adventurer Savvy Jollibee Explainer Staying In Heading Out Fried Chicken Chickenjoy
Your Guide to Thriving in This Strange New World
Staying
In? What to watch, what to eat, and where to shop from home
OR
Heading
Out? What you need to know to stay safe when heading out