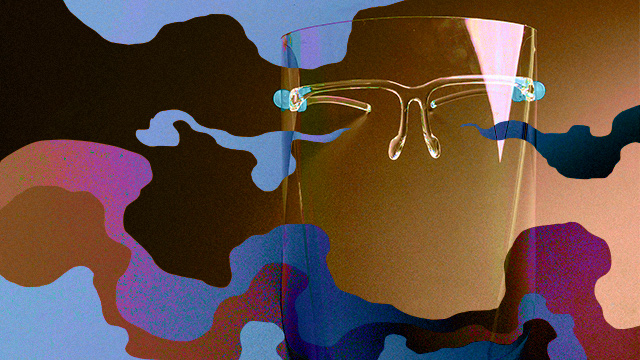 Especially outside a hospital setting.

(SPOT.ph) The wearing of face shields, or that piece of plastic barrier that would supposedly protect you from being exposed to virus particles, was first required in high-risk areas in the country in July 2020. Prices range from P26 to P50 for the disposable ones, based on the Department of Health's suggested retail price. The cost goes up to as high as P250 for the acryclic ones, which don't fog or get blown by the wind when you're outdoors.

But after more than a year of the face shield requirement, lawmakers, experts, and other people are questioning whether face shields are really effective—especially since we're one of the few countries (if not the only one) using it outside the hospital setting. To study just how effective it is, engineer and University of the Philippines professor Joshua Agar presented a simulation of the physical effects of using a face shield based on a whole lot of science.

Agar, who is a registered civil engineer and Master of Science in Civil Engineering graduate, specializes in wind engineering. And with SARS-CoV-2 being an airborne virus that caused COVID-19, wind dynamics and related scientific laws are pretty relevant.

Do face shields work against COVID-19? "It mainly depends on the setting," answered Agar in an e-mail exchange with SPOT.ph. He explained two scenarios: one in the hospital and one in a public setting.

"In hospitals, where the health professionals are exposed to huge droplets—that behave like projectiles—which came from sporadic emissions like coughs and sneezes, face shields protect these health professionals. The context in the hospital setting is that emissions are directly introduced into the air, like when the patient is being intubated. However, it is important to take note that the droplets emitted vary in sizes. There are these huge droplets, which act like projectiles. And there are these small droplets, which linger longer in the air due to its slow settling velocity," Agar explained to SPOT.ph.

Agar verified the claims of other studies that small droplets from a coughing "recirculate back into the region between the face shield and the face increasing the chance of inhalation." He also explored additional scenarios, such as when the person wearing the face shield is not directly facing the source, which resulted in more aerosols within the face shield.

"With these findings, along with the previous studies mentioned, face shields don't offer total protection in hospital settings and must not be used as a substitute to face masks. That's why health professionals still have to wear face masks and safety goggles to protect themselves from these sporadic aerosol emissions," Agar concluded.

"Outside those scenarios, universal masking is already enough to prevent direct emissions, therefore face shields are no longer needed other than the scenarios mentioned in the hospital settings. The main concern now is with the airborne transmission."

What Happens When You Wear a Face Shield While Walking

Through his Twitter account, Agar presented a situation in which a person using a face shield is in constant movement. The scenario is also regarded as low-momentum, which means that there's no velocity in the air coming at you—unlike a cough or a sneeze (which is high-momentum)—but the air (possibly with airborne virus) is still there. In this simulation that shows "vortices, negative pressures, and reverse flows" (all terms related to wind dynamics), there is a high concentration of airborne particles (shown in blue) behind the face shield and a person's face.

SARS-CoV-2 is known to enter the body through the mouth or nose, which in this simulation, is nestled with airborne particles because of the face shield.

In another simulation, Agar explained what happens when there's an "oblique angle of approach." The scenario is similar to when a person wearing a face shield is in motion and is looking left and right, probably shopping, walking, commuting in public transport, or just going about their daily lives. After all, you don't walk just looking ahead; so at some point, the air—which may or may not come with airborne virus particles—could come to you at 45 degrees. The blue color in the simulation indicates the concentration of airborne particles.

"If the air that the face shield wearer is moving [in] has those airborne Covid-19 particles, then that person is already out of luck. In essence, a face shield is a detriment when dealing with airborne transmissions and the mandate on face shields should be abolished outside of hospital settings," he also told SPOT.ph.

Other Studies About Face Shields

A 2021 France-based study by Wendling et al. experimented with the efficacy of face shields and concluded that "validated face shield should be included as part of strategies to safely and significantly reduce transmission in the community setting." However, the face shield they used are similar to those used by medical professionals and not the flimsy, disposable ones that are in widespread use in the Philippines.

Verma et al., who are based in Florida, also released a study in 2020 that visualizes droplet dispersal for face shields and masks with exhalation valves. Their simulations showed that the virus and aerosol droplets still lingered in the air. "Probably waiting to be sucked by the suction mechanism brought by a person moving with face shields on," Agar commented.

Bartels et al., who are based in Ohio, released a laboratory study of physical barrier efficiency for worker protection against SARS-CoV2 while standing or sitting. It pointed out that even though barriers and shields protect people at initial impact of the emission, the droplets will linger for some time due to the constriction brought by the physical barrier. It also observed slow settling velocities.

World Health Organization country representative Rabindra Abeyasinghe told CNN Philippines on September 7 that it's not the right time to talk about changing the current policy on the use of face shields. The comment was made following criticism by lawmakers and scientists regarding the ineffectivity of face shields.

"In a situation where the face shields are considered an additional layer of protection and the country yesterday reported the highest number of cases, I think we shouldn't be even talking about changing the position now because we may in the process give the wrong message to the public," he said.

Abeyasinghe said that since the "country [has] decided that face shields should be worn," the Philippines shouldn't change its position now give the high number of cases. "That will send a wrong signal to the people," he added.

The World Health Organization also said that they are "looking at the Philippine experience" in wearing face shields. "It's interesting that we have been able to sort of delay the speed by which the Delta variant is spreading, but we don't know if the face shields are a contributory factor," the official said.

During the hearing of the Senate Blue Ribbon committee on the controversial purchase of face shields by the Department of Health (DOH) on September 7, senators questioned whether the face shields purchased from the Procurement Service of the Department of Budget and Management were the same ones they bought using their own funds.

“Isn’t that double payment? You transferred money and then you will buy again [the same supplies] using your own funds? It is a case of double payment,” Senator Panfilo Lacson said.

It was in 2020 when the DOH transferred P42 billion to the Procurement Service of the Department of Budget and Management (DBM-PS), which was tasked to purchase PPEs, testing kits, face masks, and face shields. Health Undersecretary Carol Taiño confirmed that DOH also bought face shields at P124 from DBM-PS. When asked if it's the same face shields they bought with their funds, the health official could not confirm the “source of the procurement.”

Agar's simulations are "guided by the scientific laws that were taught to us in our primary and secondary education: The Law of Conservation of Mass and Newton's Laws of Motion." As a quick review, he explained that the Conservation of Mass also leads to pertinent scientific laws like the Transport Equation, which describes how particles are transported on a given flow like in the air; Continuity Equation, which deals with incompressioble fluids; Navier-Stokes Equations; and Computational Fluid Dynamics. All these are further explained in a publicly available PDF presentation.

"The good thing about scientific laws is that it manifest in natural processes that we normally encounter like how the river sediments are deposited on the still portion of the river bank in a river bend, how we observe that dusts are deposited more at the back of vehicles than the front, how flies anticipate an incoming swatting attempt due to the burst of positive pressure that they detect, how plastic pollution sadly deposited on our once-beautiful beaches. That's why they are scientific laws in the first place: They survived the tests of time," he said in a tweet.

When asked if he has plans of publishing his study, Agar told us: "I was initially planning to just to appease the demand of the epistemic trespasser of being subjected to peer review, but I decided against it and surmised just to make all the results and data public, for two reasons:

"One, there are already previous peer-reviewed scientific literatures that say so. Our good trespasser and pretender wasn't looking that much and remained blindsided by his self-importance. The laws of science are just confirmed once more and manifested in the processes, which were confirmed by those literatures. Science doesn't care about your pride and your feelings.

"And two, based on my experience, the review process takes a long time, from three months to two years. There is urgency in providing the answers and the public should not wait that long."

Face Shields News Adventurer Savvy Seasoned Science Explainer
Your Guide to Thriving in This Strange New World
Staying
In? What to watch, what to eat, and where to shop from home
OR
Heading
Out? What you need to know to stay safe when heading out