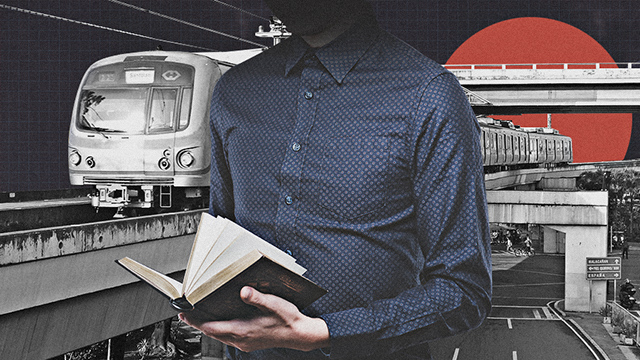 You Are Here: Cocooned in the LRT

Danton Remoto's musings on what riding the train once was.

(SPOT.ph) If you were a drone, you would see a slow LRT 2 train wending its way from Santolan to Recto. I would board it in Katipunan station, with its smelly toilets and unwashed floors. It was a Thursday morning, and I was going to Law school at a university in Manila.

The train would be crammed full of students going to the University Belt: foreigners taking Medicine, wearing their white uniforms and talking in a strange and melodic language; frisky teenagers wearing their Physical Education uniforms; and Law students like myself, reading our tomes, err, our books. There were also office employees and factory workers, who kept on looking at their watches or trying to catch some sleep.

I looked outside and there was the Saint Joseph’s Church; we were now in Anonas. I remembered my mother, who used to teach Music at the Quirino Elementary School two blocks behind the church. She would often pass by this route, my beautiful mother who taught Music to four generations of students.

The ugly buildings of Aurora Boulevard blurred before my eyes, and now it was Cubao. Half of the people in the train alighted here, workers going to Caloocan in the north, or Makati in the south. Then we would resume our trip, cocooned in the caterpillar shape of the train, past the smart town houses of New Manila green with tall trees, past the Our Lady of Mount Carmel Church, past the beautiful building that used to house Goethe House, the German Cultural Center, where I attended book launchings 20 years ago.

The foreigners had stopped their musical conversations. Now they were reading their thick medical books. The Law students continued reading their books on Persons and Family Relations, the Revised Penal Code, or Obligations and Contracts. They muttered words and closed their eyes, memorizing the provisions that the terror professors might ask later in class.

You knew you were no longer in Quezon City and now entering Manila because the tangle of electric wires were more prominent; the rooftops rustier. Sometimes the air was a gray dome above us, all the way until we reached the terminal at Recto.

From Recto, there is access to the LRT 1’s Doroteo Jose, making it possible to go north to Roosevelt in Quezon City, or go south to Doroteo Jose in Manila. I took this train later, when I lived in a condominium unit near Munoz Market. I was appointed Dean of the College of Journalism at The Manila Times College in 2016 and when my car was on number coding, I took the train. The Roosevelt station also had smelly toilets, but at least they were consistent. Students and factory workers made up most of the passengers here, aside from people going to the markets at Cloverleaf or down south, in Baclaran.

But the passengers of LRT 2 were more aggressive, pushing and shoving to get inside. I would automatically stand in the space near the door, and let them rush in and out of the train. The sights from this train were sadder: smaller houses made of thin plywood, a scraggly line where the laundry was hung.

My heart leapt when I saw the solid building of the Scottish Rite Temple, remembering the one-and-half that I had spent living in merry, old Scotland. This would be followed by small buildings and dormitories. Only De La Salle University looked grand, with its tall white columns and expanse of greenery.

More condominium buildings were rising in the area since I began taking the train, and now they must have been finished, including that ugly one that now stood behind Jose Rizal’s monument in the Luneta. I wonder what Manila and its grand buildings were once like, before the Second World War came and destroyed it. Manila was the second most-bombed city in the world during that war, after Warsaw.

I would get off at Arroceros, and thank the Lord that the beautiful park was still there on one side, and the Metropolitan Theatre was still standing on the other. There were only a few places in the Philippines where nature and culture were within breathing spaces of each other.

Sometimes, I would go to the toilet near the bus station. You had to pay P10 but that was all right, since it was air-conditioned and clean. While inside, you could see on the wall the photographs of Old Manila, in black and white, our beautiful churches and our great universities, before the bombs whistled and fell, destroying them forever.

Danton Remoto’s latest book is Riverrun, A Novel, published to rave reviews by Penguin Books South East Asia. It is available at Shopee Philippines, Waterstones UK and in the rest of the world through Kinokuniya and Amazon.