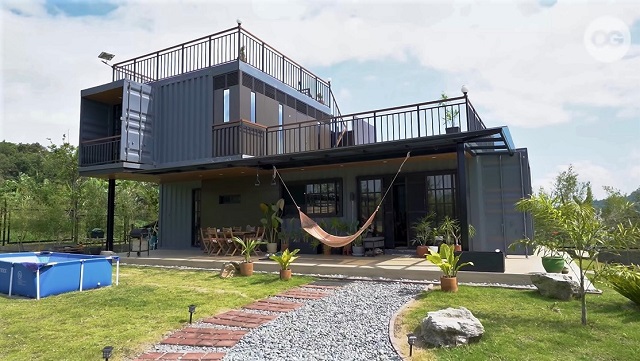 (SPOT.ph) We can't deny there's been a huge push to move out of Metro Manila in recent years. If you're one of the folks looking into the possibility, you can check out how one guy named Mike Rivera turned the dream into reality with a sleek and modern-looking container home on the foothills of Mt. Makiling. Armed with three container units and a whole lot of tenacity, Rivera and family came through with a uniquely designed and 100% cozy home with stunning views of the surrounding mountainscape.

Also read: This Couple Made Their Tiny-House Dream Come True in Batangas

Check out this sleek container home near Makiling

In a video exclusive with the OG Channel, Rivera shared that he's been into the concept of container-van homes since 2014. He spent some time studying how to make his own since then—but it was when he spotted the tiny house in Batangas on the OG Channel too that his own journey really began.

Their own story was pretty similar. He explained that they had wanted to live in a subdivision outside of Metro Manila but the lots were too small for the price. Rivera looked at plots of land in places like Tagaytay before he ultimately "fell in love" with their home's current spot in Calamba, right on the foothills of Mt. Makiling.

Rivera shares that they had lived in Makati before making the big move. "Comparing the two, between living there and living here, it's a world of difference," he said. "Doon mainit, puro semento, no fresh air. Unlike dito."

And in a house that has two decks to enjoy a 360-degree view of Makiling's greenlands, there's no doubt which is the better choice. The sleek home was built using three container units as the base; additions were put in to maximize the space. There is a living room, kitchen, dining room, plus two rooms on the second floor.

As a tip for those hoping to do the same, Rivera shares that it's never too early to start putting your dreams into action. "As for the house, if you have something in mind, 'wag mental note, isulat mo, i-drawing mo." he says. "Kung wala kang plano, 'yong basta-basta ka na lang, mas magsisisi ka, e. Mas maganda, maaga pa kahit wala ka pang resources; it pays to have a plan."

You can check out this sleek container home in Calamba through the OG Channel's full video:

Make sure to subscribe so you can watch new eps as soon as they premiere!

OG or Only Good is Summit Media's flagship video-first brand. A new episode drops every Friday at 8 p.m.