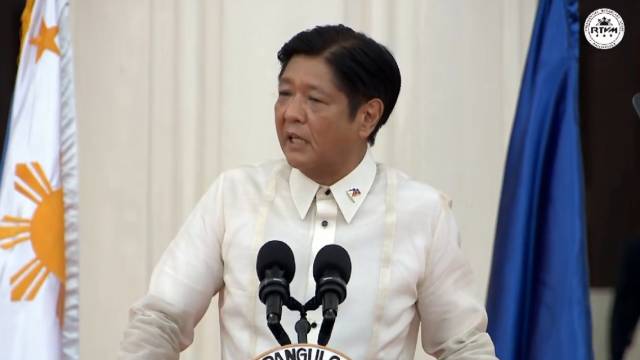 "Do Not Be Afraid": Words to Hold on to From Bongbong Marcos' Inaugural Address

Ferdinand Marcos' son is now the president of the Philippines.

(SPOT.ph) Ferdinand "Bongbong" Marcos Jr. is now the 17th President of the Philippines. Son of late strongman Ferdinand Marcos, he was sworn into office on Thursday, June 30 at the National Museum. Present at the inaugural ceremony was his wife Louise "Liza" Cacho Araneta-Marcos and their three children Sandro, Simon, and Vincent. As was former First Lady Imelda Marcos. Vice-President Sara Duterte was also, of course, in attendance.

The President returns to Malacañang Palace after a tumultous childhood spent within its walls, to say the least. The next years under his administration will be decisive in ways that perhaps no presidency has been before—and it all begins today. To set the tone, we list down some of the most telling bits from his inaugural address and see what the future, and the Marcos administration, might have in store for the Filipino people.

"We will go very far, under my watch."

"We will go farther together, than against each other," continued the President. He began his speech by building on his campaign for unity.

"The changes we seek will benefit all and will shortchange no one."

"You pick me to be your servant, to enable changes for all," said Marcos.

"I am here not to talk about the past; I am here to tell you about our future."

Marcos focused on being able to deliver throughout his administration without frills.

"No excuses, just deliver. It was like that, once upon a time."

Marcos proceeded to reference the past, particularly his father's administration. He stated that "Government will get as much done alone, without requiring more from you. That is what government and public officials are for."

"The forthcoming State of the Nation will tell you exactly how we shall get done."

The President stated that concrete solutions for our "success" will be better clarified during his first SONA.

"We shall seek, not scorn dialogue," he said, painting a picture of openess, continuing, "Be open to suggestions coming from hard-thinking and unsparing judgment, but always from us Filipinos."

"No more secrets in public health."

The President then went on to focus on the major sectors of the country, focusing on those most hit during the pandemic.

"Six years could be just about enough time."

He continued to talk about infrastructure, commending his father's administration and the outgoing one. "I want to build on success that's already happening," he stated, adding that there will be a "comprehensive infrastructure plan."

"No looking back in anger nor nostalgia."

"The road ahead" is rough, Marcos said, but one we will walk "together." He pointed out to the economic troubles of the country. "We will build it back better," promised Marcos, in a reiteration of his no-looking-back mantra from earlier.

"You will not be disappointed, so do not be afraid."

"With every decision that I must make I will keep foremost in my heart and in my mind the debt of gratitude I owe you for the honor and responsibility you have conferred upon me," stated the President. He closed his address with a promise to work tirelessly and a final, definitive, referral to himself as "The son."