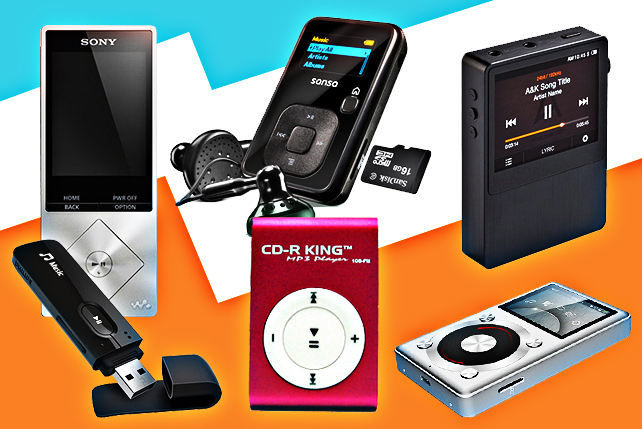 From a jogger’s music buddy to a music-lover’s dream, we give you the lowdown on portable music players in the Post-iPod Age. 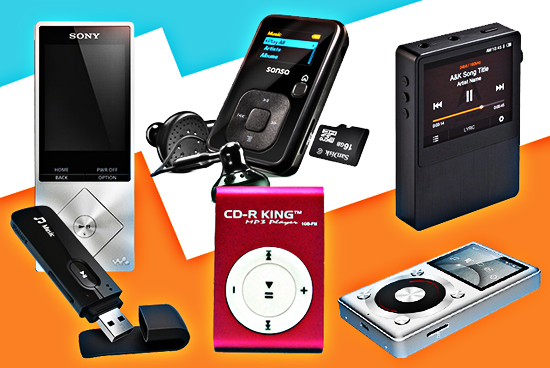 (SPOT.ph) The iPod Classic was laid to rest last year. It’s possibly the most amazing thing Apple invented (even better than the iPhone or iPad or future iTub or iBed or iFridge) and for people who enjoyed the convenience of having a buttload of music with them all the time, the news of its discontinuation was just...sad.

But with the news of Sony (that Sony, the company targeted by hackers for funny films and, for some reason, gaming-PSN’s perpetually down!)  adding sleeker players that satisfy both casual listeners and (wannabe) audiophiles, we feel like the age of portable music players isn’t experiencing a twilight. With the iPod’s monopoly out of the picture, we’re free to explore our options. We found 10. 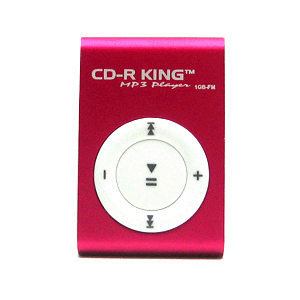 Prices start at P180 for their basic portable music players and P1,290 for their most advanced multimedia player. Their gadgets provide decent enough performance to satisfy your on-the-go music and video needs. Just don't expect too much and you'll be fine-and keep your receipt for warranty. 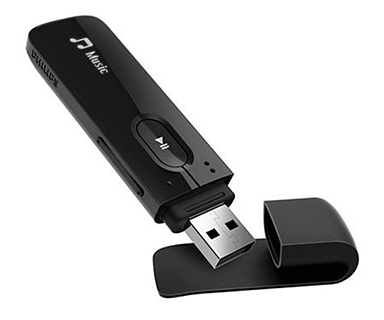 Philips offers several players in their GoGear line depending on your multimedia need. Their GoGear Mix (P1,500++) is perfect for those who simply want a music player when they're commuting or jogging, while their GoGear Ariaz (P3,500++) is geared for those who also want to bring their favorite shows and movies on the go. Their players look tough enough to survive commute/exercise, offer decent performance, and have decent battery life. 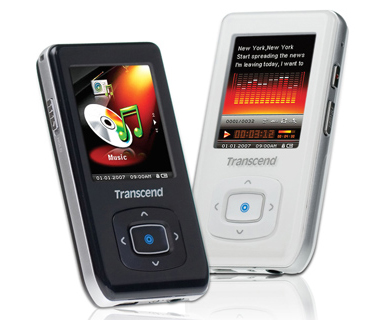 Most people equate the Transcend brand with memory cards. Surprise! They manufacture MP3/MP4 players, too. The players in their M300 line (priced at P2,000 to P3,000 depending on the model and where you get them) are as basic as they get. Plug them to your PC, load them with your favorite tunes, and you're ready to go. They sound good, they're compact, they're fairly good-looking players, and they have decent battery life (up to 15 hours of music playback). 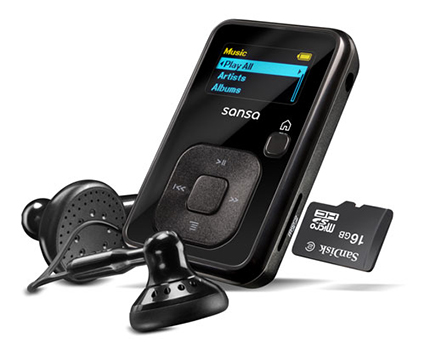 If you're looking for a good alternative to Apple's iPod Nano or Shuffle, check out SanDisk's Sansa line of portable music players.

They’re cheaper than the iPods, but the Sansa players give Apple a run for its money; they offer a wider range of supported file formats (including high-resolution music file formats like OGG and FLAC), a sizable internal memory (4 to 16 GB, depending on the model) that's expandable up to 32 GB via a microSD card slot, an astonishingly good battery life (some models last up to 25 hours), and a price range of around P2,500 to P3,500. You could say this Sansa is a strong contender for Game of Thrones: Music Player Edition (yeah, we couldn't resist). 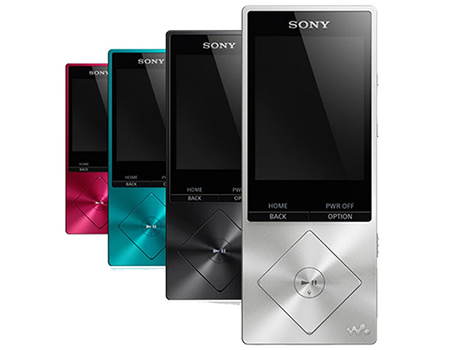 Sony ushered in the birth of highly portable music with their Walkman line and they've been at it ever since. The granddaddy of portable music is still pumping out portable multimedia devices like no one else's business.While they may have retired the original Walkman years ago, they kept the name and kept going.

Sony offers a good selection of players ranging from the basic (their Walkman B Series of players, P2,500 for the 8 GB version), to sports-oriented,waterproof designs (their W and WS Series, price starting at P4,999), to more sophisticated, high-resolution digital audio players (their flagship NW-ZX1 and ZX2 players; P36,999 for the ZX1), and everything in between.

Our current favorite is their NWZ-A15, an entry-level, hi-res audio player (P8,999), which may be the best choice if you're planning to dip your toe in the world of high-resolution music. With its low-key, no-nonsense design and functionality, supreme portability, amazing audio processing capability, wireless connectivity, and its insanely long battery life (up to 30 hours), the NW-A15 is tough to beat. Oh, have we mentioned that it plays videos too? This isn't your (grand)father's Walkman, son. 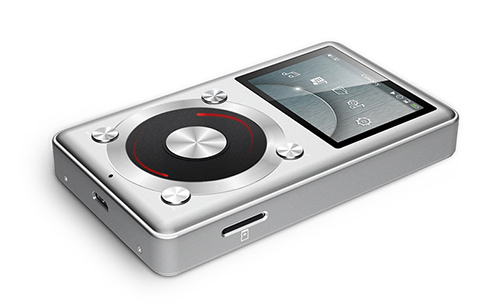 FiiO is a brand from China that's currently making waves in the audiophile community. They offer affordable high-resolution digital audio players that rival even the more expensive brands. China-made products aren't synonymous with high quality (yet), but there's always that exception to the rule and FiiO's that exception. Trust us.

FiiO's X series of players comes in three varieties: the X1 (P6,000), the X3 (P9,000), and X5 (P18,000). Even for those with pickier ears, we're pretty sure that any of these devices are up to scratch in the sound department. They all provide great audio quality without breaking the bank.

If you’re a first-time buyer, check out the X1. It may look like an iPod knockoff but that's really where their similarities end. The FiiO X1's probably one of the best budget high-resolution music players capable of handling 192 kHz/24-bit audio files with grace and ease, and they can drive even some of the more demanding headphones out there (it can even drive a pair of 150 ohm headphones to decently loud levels). They sound phenomenal (for the price). It's really only knocked off by the NWZ-A15 as our favorite because it lacks internal memory and it doesn't play videos (a concern for some people). Overall, however, the X1 is a steal. 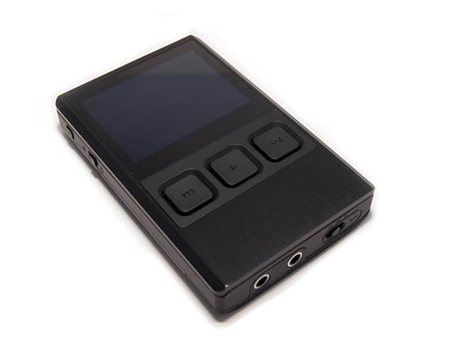 At around P20,000, the iBasso DX90 is not cheap. But it's not expensive enough to drive potential buyers away. In our world where we see much more expensive DSLRs (paired with high-end lenses) used as bling, the DX90 is reasonably priced considering how good it is. There's also the DX50 (sold at a little over DX90's price) if you're on a tighter budget.

Like FiiO, iBasso is releasing affordable high-resolution audio players to the public and both the DX90 and DX50 are as good as or even better (depending on your preferences) than the FiiOs, so it's all down to your ears and how you want your music to sound. They also look slick and sexy-if you're into monolithic black things. 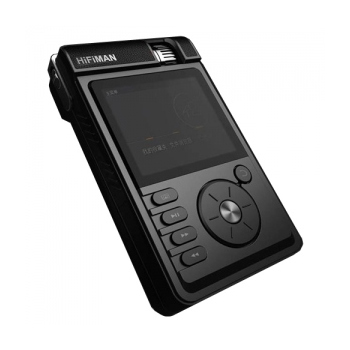 Some people want audiophile-level gear and music with them at all times. If you’re one of them, the HiFiMan might just be the player you need to aurally please you wherever you are, whenever you want.

At more than P50,000, the HM-901 is not for people who really just want something to play their music with; it's more suited to those who get goosebumps with the mention of things like 32-bit DACs, DSD playback capability, and replaceable amp chips. 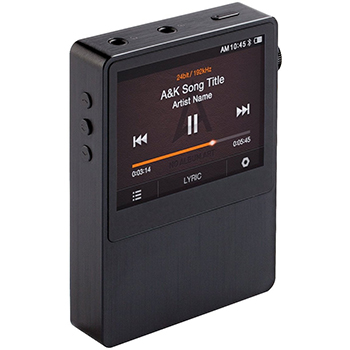 For people who have more problems with audio fidelity than with money, there’s the Astell and Kern AK240, which is priced at a whopping P100,000++. Yup, you read that right. One. Hundred. Thousand. Plus.

This player is absolutely phenomenal (assuming you have the right equipment, i.e., high-end headphones, high-end cables-enough money to buy it and not plunge into poverty, etc.-to properly harness and benefit from it) capable of producing sounds like you've never heard them before. The only real problem we found with it is that it's insanely, ridiculously, mindbogglingly expensive. And that we're poor.

Allow us to modify that photography axiom a bit to fit this article-the best portable player is the one that's with you right now.

Beyond audio fidelity, sound clarity, or anything audiophiles consider necessary, our phones, the one we have right now, offer something that's more important to most people: convenience.

Need your entire music library and your favorite shows and movies with you? Go online, tap your favorite music, movie, and TV streaming app. We literally have access to every music, movie, and show in the world in the palm of our hands. Hell, even the crappiest smartphone is still pretty damn great. Your phone + the Internet = AWESOME.

Music Mp3players Musicplayers Portablemusic
Your Guide to Thriving in This Strange New World
Staying
In? What to watch, what to eat, and where to shop from home
OR
Heading
Out? What you need to know to stay safe when heading out