Contest host Mia Bayuga had her hands full introducing each of the flamboyant costumes down the runway. From over 60 cosplayers, the contestants were trimmed down to 15, until finally, only three were chosen: Samantha de Guzman in her Pharoah of Lilith of Battle of Immortals costume for Best Female Cosplayer; Dennis Madarang in his elaborate Balanar Arm Dota outfit for Best Male Cosplayer; and Cykah Malagad for his meticulous depiction of Astaroth from the game Grand Chase won Best Mecha.

Ronquillo also unveiled Tattoo’s latest promo, available until July 31. All new Tattoo Postpaid Unlimited Plan subscribers will automatically receive a tattoo Gift Certificate from Globe worth P1,500 or P2,500, respectively. The gift certificates can be used to purchase a Swatch Watch from participating Swatch outlets nationwide, by or before September 30. 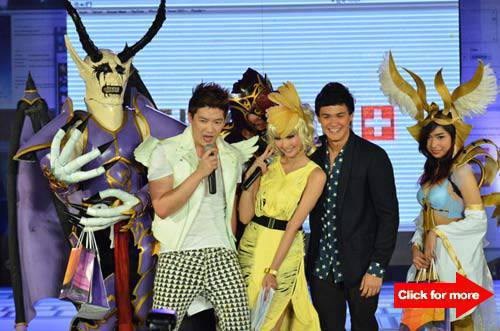 Hosts Tim Yap and Alodia Gosiengfiao with Matteo Guidicelli and the winners. Click for more.

Swatch Globetattoo Tattooedintime
Your Guide to Thriving in This Strange New World
Staying
In? What to watch, what to eat, and where to shop from home
OR
Heading
Out? What you need to know to stay safe when heading out