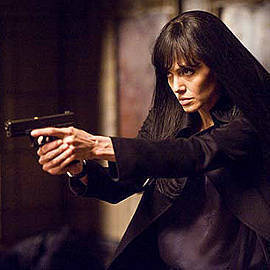 The Angelina Jolie-starrer is "one of the most intense and rewarding experiences you’ll have at the movies this year," says SPOT.ph movie reviewer Paul Daza.

Of the events depicted in the mind trip that was Inception, viewers repeatedly asked themselves, "Is this really happening to Leonardo DiCaprio"s character, or is it all just a dream?" Similarly, those watching the surprisingly satisfying contemporary thriller Salt may find themselves wondering constantly if Evelyn Salt (Angelina Jolie) is a Russian spy or not. Unlike Inception, however, Salt provides a more conclusive answer by the time its end credits roll.

In Salt, Jolie is back in full action babe mode as Evelyn Salt, a happily married CIA officer who is accused of being a Russian spy by a defector. But instead of professing her innocence, Evelyn goes on the run, using all her impressive skills as a covert operative to elude capture by her colleagues Ted Winter (Liev Schreiber) and Peabody (Chiwetel Ejiofor). The explosive and deadly game of cat and mouse takes her from Washington DC to New York, where she is hounded and sometimes helped by her murky past. But as questions about her identity are answered, new ones are raised about the people she thought she knew. 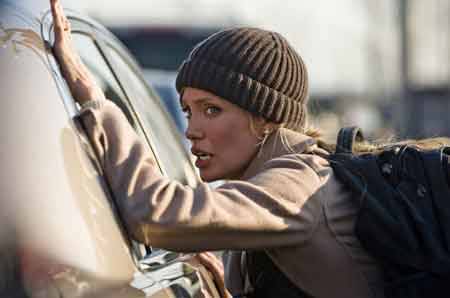 Salt is an enthralling thrill ride with many shocking twists and turns that’s made all the more effective by its more traditional, "old school" style of filmmaking. This is one of those rare big-budget movies which feels like it could have been made in the 80s, when computer animation was still in its infancy and filmmakers actually had to stage spectacular set pieces like car chases and gun battles for real rather than let digital artists do all the work. There were surely some computer-assisted visual effects in the setpieces which happen every ten minutes of Salt, but as a whole, the movie’s spectacle feels authentic, and not the result of computer wizardry. There are no outlandishly cartoony scenes where a giant magnet attached to a helicopter lifts a van full of people into the air like in The Losers, no scene where Angelina Jolie fires bullets that can "curve" like in Wanted. When a character is shot in Salt, he or she dies...most of the time.

Adding to the nostalgic 80s flavor that runs through Salt is its resurrection of the Cold War between the former Soviet Union and the USA as the force which propels the plot. And though it’s mainly concerned with the methods which the Russians use to spy on the Americans, Kurt Wimmer’s screenplay cleverly manages to weave into its intricate tapestry the situation in North Korea and the escalating war between Muslims and Christians. Even JFK’s assassin Lee Harvey Oswald is included in the mix.

It was probably no accident that the producers turned to Philip Noyce to helm Salt, since he was the one who directed two of the best movies made from Tom Clancy’s Cold War bestsellers - Patriot Games and Clear and Present Danger (which both starred Harrison Ford as Jack Ryan). What Noyce brings to Salt is a tingly, escalating sense of paranoia that never gives the viewer time to get bored, and a confident, commanding knowledge of the spy genre that serves the movie immeasurably. Having made a couple of excellent films of this type before, Noyce knows precisely what works and what doesn’t, what tools to employ and what clichés to avoid. I loved the fact that one of the film’s most important New York sequences was situated not in the usual high-tech skyscraper, but in a structure that one hardly sees in a major Hollywood espionage movie - a church. Noyce’s nod to the father of the spy genre, James Bond, is also notable in a chilling scene which takes place in an elevator. Unlike most homages, though, Noyce’s use of a memorable prop from the 007 film From Russia With Love is not done to make viewers laugh, but to show them how frightening the villains of Salt really are.

If there’s one thing the film could have done away with, however, it was the decision to make Jolie play a blonde, which was distracting and took some time to get used to. There’s also a scene late in the movie where the Tomb Raider star puts on a mask to make her character look like a man. Normally, that would be acceptable since disguises are part of any covert agent’s arsenal. Salt’s disguise, however, is far from convincing, giving her the appearance of the most bizarre looking man since the late Michael Jackson. And since we’re on the topic of famous African-Americans, it’s also puzzling why the team behind Salt had a white man play the US president. Couldn’t they cast an actor who had the same ethnicity as Barack Obama?

These quibbles aside, Salt is still one of the most intense and rewarding experiences you’ll have at the movies this year. Like Inception, it’s a movie that proves that Hollywood can still spring a surprise on even the most jaded moviegoers.

Salt Moviereview Angelinajolie
Your Guide to Thriving in This Strange New World
Staying
In? What to watch, what to eat, and where to shop from home
OR
Heading
Out? What you need to know to stay safe when heading out