UAAP Basketball: 10 Things About the Ateneo-La Salle Rivalry You May Not Know

Whether you give a hoot or not, here’s what keeps the blue and green flames igniting in the UAAP hard court.

Caveat Lector: (Reader Beware:) Skip this article if you don’t give a hoot about the schools mentioned in the title, or if you do care but think you already know enough. But if like us and the rest of the crowds that troop to their games or make a TV date out of their matches, you want a piece of the hard-to-ignore action, read on.

Whether you’re sick to your stomach at the thought of it, craving for more of it, or just not giving a damn about it, you’ve got to admit--the Ateneo-La Salle combo has got to be the hottest item off the UAAP menu. While other sports and teams in the league clamor for more attention from both the media and the public, Ateneo and La Salle get more than enough of it. The rivalry continues to gain popularity even being placed alongside legendary Philippine Basketball rivalries like YCO-Ysmael in the Manila Inter Commercial Athletic Association (MICAA) from 1950s to 1970s and Toyota-Crispa rivalry in the Philippine Basketball Association (PBA) from 1975 to 1983. And as if not enough has been written about this collegiate hard court rivalry, SPOT.ph lists 10 things you may not have known about the Ateneo-La Salle UAAP rivalry. And just to douse any "favoritism" fires our beloved commenters might start, for the record, none of us in SPOT.ph went to either school. 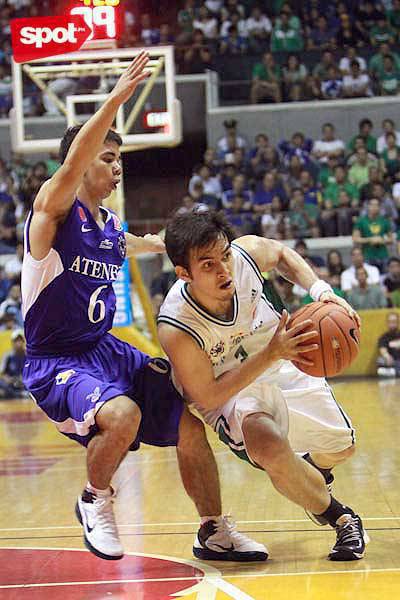 There’s no stopping the blue and the green when they’re up against each other.

1. There’s a need for some serious myth-busting.

If you’re from either side of the fence, or even both, you’ve probably heard about this myth behind the Ateneo-La Salle rivalry. Word has it that the heated link between these two schools started way back in 1939 when Lasallian students allegedly threw fried chickens at the gate of the old Padre Faura campus of Ateneo. This was allegedly after the 1939 NCAA championship where La Salle won over Ateneo. Now who could confirm that? And if true, were the Lasallians trying to be metaphorical with the fried chickens (eagles)?

2. Both the Archers and the Eagles were NCAA babies.

Hit the NCAA history books and you’ll see that Ateneo and La Salle were both founding members of the National Collegiate Athletic Association (NCAA) in 1924. In 1930, three member schools--University of the Philippines(UP), University of Santo Tomas (UST), and National University (NU)--left the NCAA to form the UAAP. Ateneo entered UAAP in 1978 and La Salle followed in 1986. What happened after? The rivalry did.

4. They came head-to-head in the UAAP.

Just two years after La Salle entered the UAAP, the rival schools met in the finals. Ateneo bagged the title that year (1988) and it wasn’t until 2001 that La Salle won the championship against Ateneo to pose a four-peat record (1998-2001). In 2002 Ateneo ended La Salle’s winning streak. The latest finals match between the two was in 2008 when the blue eagles soared as champions. So far in the UAAP, Ateneo has five championship titles while La Salle has seven. Though Ateneo and La Salle have only met in a number of finals series in the UAAP, the two have proven to be formidable forces in the league. And though history shows there are other UAAP member schools with more Senior Men’s Basketball Championship titles (FEU with 19, UE and UST with 18 each), Ateneo and La Salle still remain in the spotlight. Let the numbers and crazy fans support it.

5. They do break records--crowd records, that is.

No need for a statistician to come to the conclusion that Ateneo-La Salle match-ups draw in the big crowds in a sea of blue and green. Next to the UAAP Cheerdance Competition, Ateneo-La Salle games call for extra security, extra patience (to camp out at the ticket booths), and extra space for the audience. Days before the 2008 championship between Ateneo and La Salle for exampple, tickets were sold out in just three hours. The blue-green rivalry was too much even for "The Big Dome" (Araneta Coliseum) as its 15,000 seating capacity was not enough to accommodate 20,000 plus fans and basketball enthusiasts. And who hasn’t heard of the ever infamous scalpers who sell ridiculously overpriced tickets, from P250 to P5,000 or even higher? That’s how inflated the interest in the rivalry is.

6. You wouldn’t want to mess with the fans.

Aside from overly-affected fans (students and alumni) who scowl at every "bad call", audiences for these two teams can be literally and figuratively big. Celebrities, politicians, businessmen, and other elite figures in Philippine society have, at one time or another, come to witness the Eagles and Archers battle. Among the high-profile game-goers that have been spotted at the Ateneo-La Salle matches: former presidential candidate and senator Richard Gordon (a former cheerleader for Ateneo); former President, the late Corazon Aquino and her daughter, Kris Aquino (Ateneo); TV Host Bianca Gonzales (Ateneo); musician Yael Yuzon (Ateneo); GMA Network news anchor Mike Enriquez (La Salle); actor, TV host, and former Vice Presidential candidate Edu Manzano (La Salle); former finance secretary Jose Pardo (La Salle); and even former U.S. Ambassador to the Philippines Kristie Kenney used to frequent the UAAP sidelines.

7. You can’t blame just the media.

Something to think about for those who believe that the rivalry is but a media creation: The media may be guilty of hyping up the competition and fanning the flames of the rivalry, but they are not the masterminds. According to Philippine Daily Inquirer’s Jasmine Payo, "We (media) really hype it (rivalry) up since we know this is what the readers want...We really stretch the story, we look for different angles, and sometimes we can even ask leading questions. We can lead them to the angle that we want or the story that we want." Sure, the media may be a big factor that keeps this rivalry going, but there are other things to consider--and those things lie just inside the green and blue fences.

8. The schools are guilty as well.

The institutions prove to be bigger and stronger influences to the rivalry. The battle is more than just basketball and much bigger than the court. According to Payo (an Ateneo graduate), "The schools play a main part in it (rivalry) whether they like admit it or not...they play a part in fueling the emotions in the students that they’re better than the other school."

Former La Sallian and Atenean player Carlos "Bobong" Velez says that the rivalry is "something they grew up with," and that they were told they could lose to anyone but the rival school. Now with that kind of early mindset for their students, who wouldn’t be programmed to think that the other’s a rival?

Aside from the mindset and school pride, Ateneo and La Salle are also two elite schools in the league that can battle it off money-wise. Both schools have the resources to recruit and train players and turn them into basketball champions. According to online sportswriter Quincy Reyes (graduate of La Salle and currently studying in Ateneo), Ateneo’s Nonoy Baclao used to be a football player in Bacolod but was recruited and turned into a cager by the school. Same goes for La Salle’s Rico Maierhofer who was discovered in Puerto Galera and was formerly a volleyball player.


In the UAAP, when it’s crazy, it’s really crazy.

Haters must be dying to get the whole rivalry over with, but sadly for them, the end is not near for the blue-green rivalry. The schools and the media are there to keep the fires burning. Other teams may be stepping up (with FEU on a winning streak this season) but it will be hard to replace the elite status that these two schools possess.

10. There could be a possible love-hate triangle.

Word has it that NCAA hotshot team San Beda College will be jumping into the UAAP bandwagon in 2012. With another power team entering the league, could there be a possible love-hate triangle among the blue, green, and red?