Law student who lost both legs in frat war-related Taft Ave. blast needs more blood
Loading
Already a member? Log in
No account yet? Create Account
Spot.ph is your one-stop urban lifestyle guide to the best of Manila. 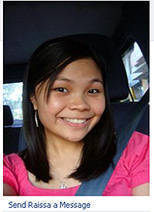 Among the 44 wounded victims of the allegedly fraternity war-related grenade blast on Taft Avenue on September 26, one law student has lost both her legs and needs a Type O blood transfusion, reports ABS-CBNNews.com. Raissa Laurel, 25, who is in her second year at the San Sebastian College-Recoletos Institute of Law, has had to have
her legs amputated below the knee, police told Inquirer.net.

Laurel is recovering at the Intensive Care Unit of the Philippine General Hospital (PGH). "Wrong place at the wrong time. At least second life," she told TV Patrol World through handwritten notes, her only way of communicating because the tubes in her mouth temporarily prevent her from speaking. She wrote that the blast happened right in front of her. "I’m okay. I still want to become a lawyer someday," she said.

The grenade blast, earlier thought to be a pillbox explosion, occurred during the street party along Taft Avenue that celebrated the end of the 2010 bar exams at the De La Salle University, according to Inquirer.net. Police said the blast may be related to a fraternity war between Alpha Kappa Rho and Tau Gamma Phi, both of which have denied the allegation. Three people may have carried out the attack, investigators said, but no suspects have been named yet. The task group Bar Operations 2010 is still evaluating the statements of the witnesses, Manila Police District Spokesperson Erwin Margarejo said in an Inquirer.net report.

Of the 44 people who were wounded, nine are still confined at the Philippine General Hospital, Manila Adventist Medical Center and Manila Doctor’s Hospital, according to an Inquirer.net report posted September 29. Aside from Laurel, a law student from San Beda College underwent amputation as well. Joanna Ledda, 23, lost her right leg.

Those who want to donate blood for Laurel may contact Linus Paterno at 0917-5569039 or Nina Lucio at 0915-4463271, or go directly to the PGH blood bank, according to ABS-CBNNews.com. For more on this story, log on to Inquirer.net, ABS-CBNNews.com and GMANews.tv. Screencap from Raissa Laurel’s Facebook.

Taft Blast Dlsublast Barexamsbomb Alphakapparho Taugammaphi
Your Guide to Thriving in This Strange New World
Staying
In? What to watch, what to eat, and where to shop from home
OR
Heading
Out? What you need to know to stay safe when heading out