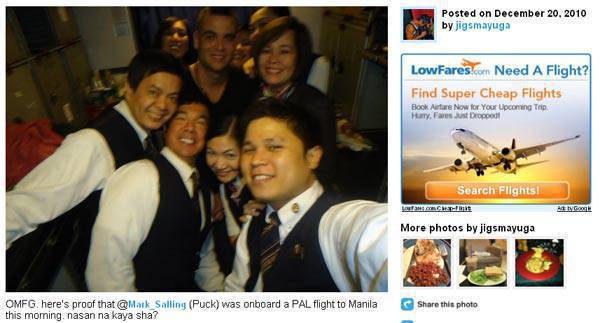 Makeup artist Jigs Mayuga posted this photo on Twitpic on December 20. The caption reads: "OMFG. here’s proof that @Mark_Salling (Puck) was onboard a PAL flight to Manila this morning. nasan na kaya sha?"

A photo of Salling supposedly with crewmembers of the Philippine Airlines (PAL) went viral earlier this week. According to Manila Bulletin, the photo was posted by Dan Lira, one of the PAL cabin crewmembers, on his Facebook account on December 20. "Based on the photo album title, the group shot, along with several others, was taken aboard Flight PR103, which flew from Los Angeles, California to Manila."

On December 21, blogger Mykiru Isyusero posted, "others are saying that he’s going to be Darren Criss’ guest for his show tonight. Which is true? Or both are true?" Unfortunately, there were no reports of Salling being in Criss’ Greenbelt concert last night.