Danica Magpantay's mother Lala Flores's 1990 Supermodel of the World International Finals Clip
Loading
Already a member? Log in
No account yet? Create Account
Spot.ph is your one-stop urban lifestyle guide to the best of Manila. 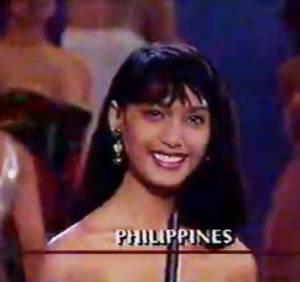 See where Supermodel Danica got her modelling genes and smarts from.

Veteran modelistas as well as younger fans of 2011 Ford Supermodel of the World Danica Flores Magpantay
will enjoy this little trip down modeling memory lane: Uploaded just two days ago on YouTube is a clip of Milagros "Lala" Flores at the 1990 Ford Supermodel of the World International Finals in Los Angeles, California. The clip shows Flores, now also known as the "Mother of Magpantay," being introduced onstage as photos from her portfolio are flashed onscreen. She is later announced as the winner of the Best Smile Award.

At the time, Flores had just graduated from her Industrial Engineering course at the Mapua Institute of Technology before embarking on a decade-long international modelling career that saw her working all over Asia and Europe. Three years after she competed in the New York finals, her second child Danica was born. Her first child Danielle, 19, also a model, competed in the local Supermodel competition last year with Danica. They have three other siblings, one more girls and two boys. Flores is now one of the most sought-after makeup artists in the Philippines.

Danica’s and Danielle’s father Pogs Magpantay, who was Flores’s college sweetheart from Adamson University, posted the video below on his Facebook page with a note saying, "This is a treasure!" The Inquirer reports that it was Pogs who found an old Betamax tape of Lala’s Philippine Supermodel win and had it converted into DVD. "It was after watching the DVD of their mom that the two approached their parents to say that, yes, they, too, wanted to be models-to be SuperModels," reports the Inquirer.