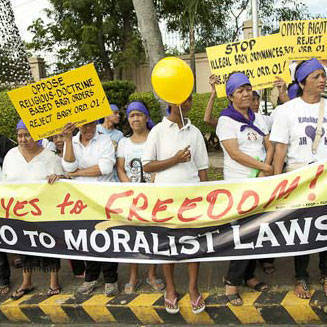 Condoms bring out The Great Divide in Ayala Alabang

The war continues between pro-ordinance residents and protesters who say "Alabangistan, new stronghold of the Catholibans." 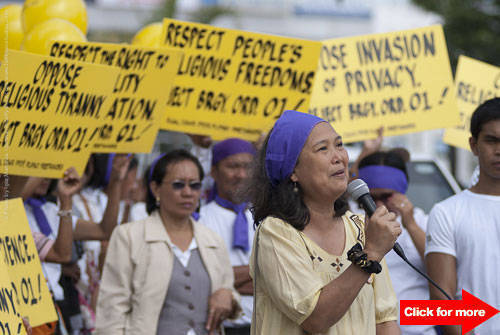 They were holding a demonstration to protest Alabang Barangay Ordinance #1 entitled, "Protection of the Unborn Child" which was set for public hearing that day. It certainly was not a scene that you see every day in the posh village of Ayala Alabang.

Alabang Barangay Ordinance #1 entitled, "Protection of the Unborn Child" prohibits the sale, promotion and the sale of condoms, birth control pills and other forms of modern contraception without a doctor's prescription.  Even with a prescription, the drugstore must record the name of the buyer and the details of the purchase in a logbook.

Under the ordinance, condoms, contraceptive pills, and intra-uterine devices are labeled as "abortifacients," and also prohibits the teaching of sex education within the barangay, unless there is parental consent.

The ordinance enraged many of the residents and various pro-RH sectors who condemned the attempt at legislating morality and referring to the posh village as "Alabangistan, the new stronghold of the Catholibans."

The village itself has been divided into two warring camps; with their frontline being defined by banners on their front gate, declaring their stand on the issue.  Some declare their support for the ordinance crying the need to protect life, while others condemn religious bigotry.

Aurora Pijuan, Convenor of Gising Barangay Movement in Ayala Alabang said that the issue is divisive.  "Friendships are on the line and you really feel the tension. People ask if you are pro (ordinance) or anti. There's no in-between. We don't respect other people's beliefs."

The auditorium of De La Salle Zobel was the venue of the public hearing where the two sides presented their arguments for and against the ordinance to the Barangay Council. At the entrance, there were two different lines for registration and the entrances to the auditorium were labeled "pro" and "anti." The seats were inside were divided by a rope in the middle.

The Likhaan Center for Women's Health brought in residents from the various communities that they serve to protest. "This is not an ordinance that affects only Alabang. If passed, this could be replicated in other parts of the country," said Junice Melgar, executive director of Likhaan.  The rallyists were initially denied entry by the village guards saying that only residents or their guests could enter. "One foreigner walking her baby, who we did not even know, saw us and told the guard that our community members were her guests. Otherwise, we would not have been let in," said Melgar.

Heated debates
"People have called us idiots, zealots, archaic Talibans. But the one thing that we have not been called is anti-life and for that, we are proud," said Atty Luis Sison in his opening statement for the pro-side.

The "anti"  side stressed the unconstitutionality of the ordinance, saying condoms, pills, and IUDs in the legal market are all approved by the Food and Drug Authority, and no barangay has the authority to usurp mandates set by the national government.

"I am not less of a Catholic just because I oppose this. The ordinance is a clear usurpation of authority, declaring illegal things that are not really illegal," Frank Chavez, a resource person for the anti-side emphatically declared.

"We should not be discussing the RH Bill here. We should leave that to Congress to decide," he added.

Representatives of various government agencies such as the Food and Drug Authority, the Commission on Human Rights and the National Commission on Women were also present to reiterate the unconstitutionality of the ordinance and its violation of their mandates the government agency appointed to regulate food and drugs and uphold human rights.

It was a heated debate, one that the Barangay Council tried repeatedly to control with reminders not to clap, boo, shout invectives or display any other kind of incendiary behavior.

But that was too much to ask in a barangay that has already been clearly divided as seen by the banners on their homes right down to the rope that segregated the seats of the auditorium.

A resident who said that she is a devout Catholic who teaches her children the value of chastity and abstinence not because of a law, but because of her beliefs, angrily asked the Barangay Council, "What makes you think that a law that regulate my morality?"

"Why would you parents want your children-boys and girls my age-to buy condoms and pills without you knowing?" a young boy countered.

And perhaps the question that was on everyone's mind that afternoon was the one asked by a clearly exasperated resident who asked anyone and everyone in the audience, "Has the ordinance even been passed? Because if it has, then what are we even doing here? Why are we discussing this?"

Others started piling out one by one shortly before the hearing ended, shaking their heads saying, "Nothing was resolved."

In an interview, Barangay Captain Chairman Alfred Xerez-Burgos, Jr.  explained, "No, it has not been approved. This second public hearing was meant to discuss the pros and the cons of the ordinance. From here, the Barangay Council will deliberate on whether or not to pass or amend the ordinance. Then it will be presented to the City Council. No one is supposed to implement it yet."

When interviewed and asked for a statement on whether or not the ordinance had indeed been passed, Barangay Captain Chairman Alfred Xerez-Burgos, Jr , he said, "No, it hasn't been passed. This second public hearing was meant to discuss the pros and the cons of the ordinance. From here, the Barangay Council will deliberate on whether or not to pass or amend the ordinance. Then it will be presented to the City Council. No one is supposed to implement it yet."

"But they already are," interjected a 27 year old male resident. Declining to be named, the resident said that he videoed through a hidden camera his attempt to purchase condoms at Mercury Drug Alabang Town Center. "They [pharmacists] told me that it was prohibited, but only here in Alabang."

There were also earlier reports of residents harassing pharmacists and admonishing them for selling condoms and pills which are supposedly already banned under the ordinance.

Former Department of Health Secretary Esperanza Cabral, who is also a resident or Ayala Alabang, corroborates this. "We received reports that residents were denied condoms. So we went to the drugstore and showed the pharmacists a letter from the Barangay Council saying that the ordinance had not yet been implemented. The pharmacists were relieved and said they would hang the notice in their store because there other residents-these Dona Victorina types-were harassing them.

"I have not heard of any such incidence. They should not be doing that," said Burgos.

And so the fight continues, the divide becoming even deeper.

Alabang Ordinance Rally Ayalaalabang Condomsordinance
Your Guide to Thriving in This Strange New World
Staying
In? What to watch, what to eat, and where to shop from home
OR
Heading
Out? What you need to know to stay safe when heading out