(SPOT.ph) Cultural Center of the Philippines (CCP) official Karen Flores announced her decision to resign as CCP’s visual arts director yesterday, August 10, during a forum at the University of the Philippines about the controversial "Kulo" exhibit, reports the Philippine Daily Inquirer. In previous reports, politicians and lay groups clamored for the CCP officials’ resignation and the closure of the "blasphemous" exhibit. "Kulo," however, was shut down on Tuesday following death threats and vandalism.

Despite the closure, however, Sen. Tito Sotto, who threatened to slash CCP’s budget and shut down CCP itself, still wants to know who approved the exhibit, reports ABS-CBN News. "Nag-meeting daw, nagbotohan daw. Hindi. Mukhang merong mga nambobola. There should be an inquiry to find out kung sino ang nasa likod nito (CCP officials said they had a meeting and that they voted on it but I don’t think that happened. It seems like they’re not being truthful. There should be an inquiry to find out who’s behind this)," he said. Lay Christian groups, meanwhile, rallied outside the cultural center yesterday, demanding an apology.

According to Flores, her decision to resign was not because she wanted to evade the investigations. "I can still be sued. Go ahead," she told the Philippine Daily Inquirer. Other CCP officials, however, expressed no intention to resign. In a separate ABS-CBN report, CCP President Raul Sunico said: "Wala naman akong nalalaman na kasalanan ko dito, bakit ako magre-resign? Pero ’pag natanggal ako, that’s another case (I don’t know what I did wrong here so why would I resign? If I get sacked though, that’s another case)." CCP Chair Emily Abrera also refused to leave her post. "They have to take me out," she said.

However, House Minority Leader Edcel Lagman warned his colleagues against "overreacting," reports the Philippine Daily Inquirer. He said there was no need to call for the resignation of CCP officials.

Artists and supporters, meanwhile, did not take Flores’ resignation and the exhibit’s closure well. A GMA News report published passages from "Kulo" curator J. Pacena II’s statement regarding the center’s decision to shut down the exhibit. "The latest pronouncement of the CCP Board sets a bad precedent. Our right to freely express ourselves was curtailed. I am shocked and appalled by how our civil liberties were exploited to satiate the sensibilities of a raucous mob. In effect, majority of the participants' ideas and artistic expressions were neglected and compromised by this decision," he wrote. Pacena is one of the artists who contributed his work to "Kulo."

For more on this story, log on to ABS-CBN News, Philippine Daily Inquirer and GMA News. 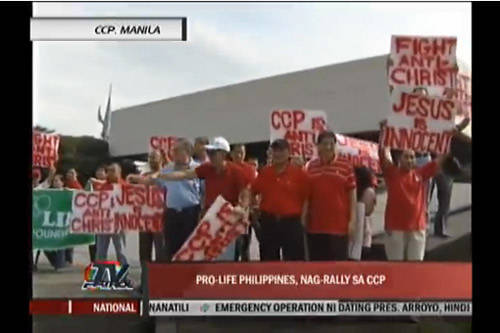 Kulo Exhibit Karenfloresresigns Ccpofficials Kulo Curator
Your Guide to Thriving in This Strange New World
Staying
In? What to watch, what to eat, and where to shop from home
OR
Heading
Out? What you need to know to stay safe when heading out