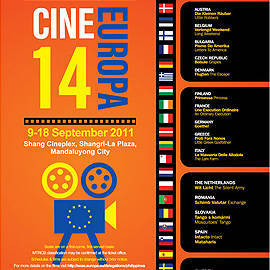 (SPOT.ph) Treat yourself to a Euro movie spree at the 14th Cine Europa Film Festival from September 9 at 18 at the Shang Cineplex Cinema 2, Shangri-La Plaza, Mandaluyong City. This year’s festival offers 18 acclaimed indie films from Europe-all under their original film classifications from their respective countries.

It’s all about revenge and retribution in Austria's Die kleinen Räuber (Little Robbers), where siblings Robby and Louise attempt to rob the bank that forcibly banished their parents from their apartment after their father lost his job; and Belgium's Long Weekend, where two ex-factory workers kidnap their former boss to make him pay for the damages caused when his company went bankrupt.

Bulgaria's Letter to America follows the story of Ivan, who seeks an old song that might save his best friend’s life; while Czech Republic's Bobule (Grapes) chronicles the adventures of two young men-one is studying to be a winemaker after inheriting his grandfather's vineyard and the other is a small-time crook and ladies' man. 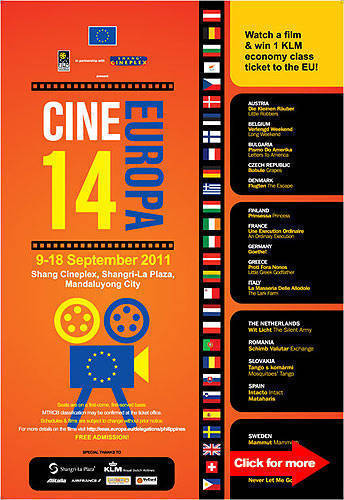 Check out our gallery for the full schedule and movie synopses. Click for more.

Denmark's Flugten (The Escape) tells the tale of Danish journalist Rikke’s escape after being kidnapped by an Afghanistan terrorist group. Finland's Prinsessa (Princess), on the other hand, features the feel-good story of manic depressive Anna Lappalainen, who heals and brings joy to her fellow patients with her sunny personality.

France brings to the table Une Execution Ordinaire (An Ordinary Execution), a film about a young urologist and healer who gets into a relationship with the dictator Stalin and is cast under his manipulative spell. Germany presents its period piece Goethe! (Young Geothe In Love)-German poet Johann falls for the beautiful yet feisty Lotte Buff, who inspires him to create his literary masterpiece, The Sorrows of Young Werther.

Little Greek Godfather from Greece tragicomically narrates the story of California-bred Alex, who acts as a godfather to a child of an aspiring parliamentary deputy in an attempt to prove himself a worthy son to his own father. Brothers Aram and Assadour, who have not seen each other for years, try to reunite in Italy’s La Masseria Delle Allodole (The Lark Farm).

Based on the true stories of child soldiers, The Netherlands' Wit Licht (The Silent Army) focuses on the journey of 11-year-old Abu, who is kidnapped and forced to join the war; while Romania's Schimb Valutar (Exchange) centers on the misfortunes of Emil, who sells everything he and his family owns to finance their migration to Australia.

Discover the story of Karol as he makes his way back to Bratislava for a brief visit in the Slovakian film Tango S komármi (Mosquitoes' Tango). Mammut (Mammoth) from Sweden shows how the quiet life of a couple changes after the husband faces unlikely encounters during his travels.

Switzerland's entry How About Love introduces you to heart surgeon Fritz, who finds himself torn between two commitments: helping refugees in Thailand and his responsibilities to his family. In United Kingdom's Never Let Me Go, childhood friends come to terms with their love for one another.

This year's filmfest also brings in two entries from Spain: Intacto (Intact), which follows the journeys of four characters whose lives eventually become intertwined in a series of fateful events; and Mataharis, the story of private detective Inés who is forced to cross the thin line between public and private matters when tasked to uncover company intrigues inside a multinational corporation.

Screenings are free on a first-come, first-served basis. For ticket inquiries, contact Shangri-La Plaza at 633-7852 or log on to www.shangrila-plaza.com.