ABS-CBNNews.com reports that "two people may face charges for pilfering money from a parcel at the government’s Central Mail Exchange Center (CMEC) in Pasay City." 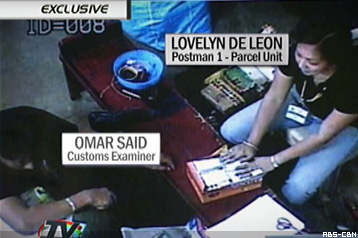 ABS-CBNNews.com reports that "two people may face charges for pilfering money from a parcel at the government’s Central Mail Exchange Center (CMEC) in Pasay City."

According to the report, De Leon and Said may have thought that the CCTV camera placed in their area wasn’t working. Hence, their seemingly brazen move.

Authorities say that De Leon and Said "are in clear violation of regulations of the Bureau of Customs (BOC) and the Philippine Postal Corporation." The opening of parcels is prohibited unless the owners or addressees are present.

The postmaster general said that further investigation will be conducted to identify if there are syndicates involved in the matter. Meanwhile, De Leon and Said have refused to talk to the media.

Philippine Postal Corporation Bureauofcustoms Lovelyndeleon Omarsaid
Your Guide to Thriving in This Strange New World
Staying
In? What to watch, what to eat, and where to shop from home
OR
Heading
Out? What you need to know to stay safe when heading out