Head of "Gusi Peace Prize" under fire for claiming to be PH envoy; DFA denies ever appointing him
Loading
Already a member? Log in
No account yet? Create Account
Spot.ph is your one-stop urban lifestyle guide to the best of Manila.

Head of "Gusi Peace Prize" under fire for claiming to be PH envoy; DFA denies ever appointing him

GMA News Online reports that Barry Gusi, the man behind the Gusi Peace Prize, is in hot water for claiming to be a diplomat. 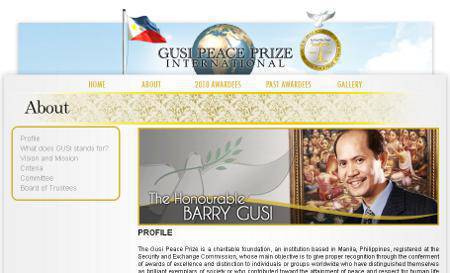 GMA News Online reports that Barry Gusi, the man behind the Gusi Peace Prize, is in hot water for claiming to be a diplomat.

The Department of Foreign Affairs learned about Gusi’s claim in May. A corporate firm had gotten in touch with the agency to verify if Gusi, as he claimed, was indeed an appointed Philippine ambassador to Micronesia and Northern Marianas. Gusi had contacted the firm to seek sponsorship from for the annual Gusi Peace Prize.

According to the GMA News Online report, DFA Assistant Secretary Catalino Dilem denied that Gusi was ever designated as an ambassador. In a statement, the DFA clarified: "Please be informed that the department has no record of any appointment being accorded Mr. Gusi."

When representatives of the firm later confronted Gusi’s wife via e-mail about the DFA’s statement, she allegedly replied: "He [Mr. Gusi] can call himself an ambassador because he always puts the Filipinos first."

The Gusi Peace Prize was established in 2002 and named after Gusi’s father, Capt. Gemeniano Gusi, a guerilla leader during the Japanese occupation. In 2008, President Gloria Macapagal-Arroyo issued  Proclamation No. 1476, which declared every fourth Wednesday of November as the "Gusi Peace Prize International Friendship Day."

The GMA News Online report also revealed that Gusi should be held liable for violating Article 177 of the Revised Penal Code of the Philippines under "Usurpation of Authority or Official Functions," which penalizes individuals posing as government officials, officers, or representatives. If the DFA pursues the case and Gusi is found guilty, he may get between six months and one day to four years and two months in jail.