ABS-CBNNews.com reports that the Department of Public Works and Highways (DPWH) got slammed by netizens yesterday, September 29, for uploading a fabricated photo on its Facebook page.

ABS-CBNNews.com reports that the Department of Public Works and Highways (DPWH) got slammed by netizens  yesterday, September 29, for uploading a fabricated photo on its Facebook page.

Netizens decried the fact that the image-which showed DPWH Undersecretary Romeo Momo with Metro Manila Regional Director Reynaldo Tagudando and South Manila District Engineer Mikunug Macud talking, with the damaged Manila Bay seawall in the background-seemed to have been altered via Photoshop. (See photo below.) 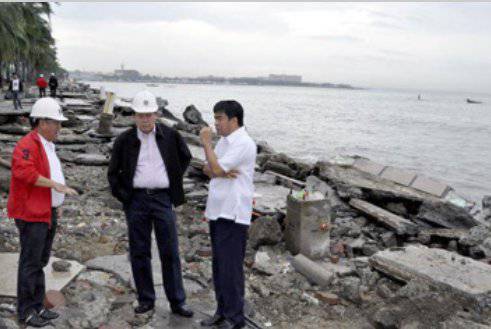 Screenshot from photo posted on ABS-CBNNews.com

The DPWH eventually apologized for the photo faux pas. (See screehshot of the statement, which was taken from the agency’s Facebook page, below.)

Jojo Malig, who wrote the ABS-CBNNews.com report, quoted Pierre Albert San Diego, a civil engineer, who said in his blog, Controlled Chaos: "Some say this is a very minor issue, but I see this is as a nice sample of DPWH's lack of integrity." Many others echoed San Diego’s sentiments.

The DPWH Central Office’s Facebook administrators have deleted the fabricated photo and uploaded new images, presumably unaltered. (See the tandem photo below, which has also been posted on the DPWH Facebook page.)

For more on this story, log on to ABS-CBNNews.com and Controlled Chaos. You can also check out the DPWH Facebook page.

Dpwh Facebook Photoshop
Your Guide to Thriving in This Strange New World
Staying
In? What to watch, what to eat, and where to shop from home
OR
Heading
Out? What you need to know to stay safe when heading out