GMA-7’s State of the Nation observed that since it was reported that the police took the mugshots of former President Gloria Macapagal-Arroyo, many people have expressed the desire to see them. In fact, there are now a number of fake or spoof Arroyo mugshots posted online. 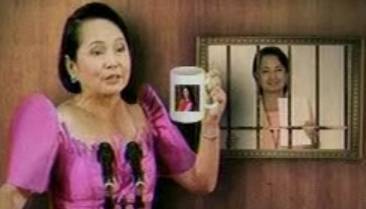 One of the spoof mugshots flashed in the State of the Nation segment. (The person who created this image was not identified.)

(UPDATED, November 22, 11:13 a.m.) GMA-7’s State of the Nation observed that since it was reported that the police took the mugshots of former President Gloria Macapagal-Arroyo, many people have expressed the desire to see them. In fact, there are now a number of fake or spoof Arroyo mugshots posted online.

UP Public Administration professor Leonor Briones said that the clamor to see Arroyo’s mugshots is "symbolic" for people who had once been in awe of or intimidated by her power. "I think they want a strong message that no one is exempt from the workings of the law," she said. However, the Pasay City Regional Trial Court has not released Arroyo’s mugshots. Arroyo’s camp has also said that they don’t want her mugshots released as well. Senator Miriam Santiago said that releasing mugshots "violates the rights of the suspect."

The report pointed out that when President Joseph "Erap" Estrada was arrested for plunder and perjury in 2001, his mugshots were immediately released to the public.

At 2:15 a.m. on Tuesday, November 22, Inquirer.net posted what appeared to be Arroyo’s actual mugshots. The photos were captioned: "These mugshots of former President and [current] Pampanga Rep. Gloria Macapagal-Arroyo did not come from the Pasay City Regional Trial Court which has refused to release the police photos. Sources who requested anonymity sent the photos to the Inquirer." 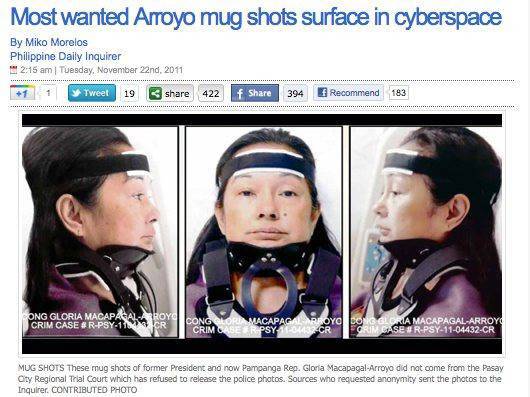 A GMA News Online report had quoted Department of Interior and Local Government (DILG) Secretary Jesse Robredo, who said, "[I] just clarified that they are not [the] real mug shots after verifying with the [Criminal Investigation and Detection Group]."

However, an Interaksyon.com report cited Senior Superintendent James Bucayu of the Southern Police District-the police officer who booked former President Gloria Macapagal Arroyo at St. Luke’s Medical Center- confirmed the authenticity of the leaked mugshot of the arrested  leader. He admitted that the mugshts are real and stressed that the source (supposedly a member of the police) will be reprimanded.

For more on this story, log on to watch the State of the Nation segment or log on to Inquirer.net and Interaksyon.com.