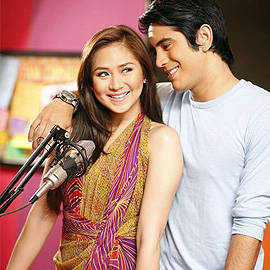 I Love Cheese Balls: Won't Last a Day Without You

Our SPOT.ph blogger on the Sarah Geronimo-Gerald Anderson rom com: "The two young actors are allowed to shine in the most flattering light."

I've totally changed my mind about Sarah Geronimo. She used to annoy me hopelessly but in the new Star Cinema/Viva films co-production Won't Last a Day Without You she is the perfect rom com leading lady-funny, endearing, and cute. The movie itself, directed by writer/director Raz de la Torre, is funny, endearing, and cute.  He managed to use all the required elements of the Star Cinema Formula for Box Office Success (among others: popular theme song, big stars, and the happy ending with a public declaration of love-can you name more?) and made a perfectly good example of a mainstream romantic comedy without the glaringly bad habits of the genre.

Sarah plays a sassy radio DJ who dishes out tough love relationship advice to her confused callers. DJ Heidee's tagline is "Di bale nang bitter... if bitter is better!" She anti-love but really a hopeless romantic, (which is a good role for Sarah Geromino, who is apparently now a better actress and a smarter girl after her own love life woes) until one day she meets Andrew (Gerald Anderson) who plays-surprise-a good looking pabling (such a traditional tisoy role, don't you think?) out to break our heroine's heart. I will leave the details out, because this movie has some cute little moments that you need to catch for yourself. Anyway a rom com is easy to figure out-boy meets girl, they are separated, and most of the time, they get together-but this one is well though-out and nicely paced, in equal parts escapist and realistic. It's the cheesy kind of kilig, which is nice. Once in a while.

There's plainly a nice sort of chemistry between Sarah Geronimo and Gerald Anderson, something still believably sweet and unsullied. Their performances are more natural than usual, although not quite "as is, where is" as Eugene Domingo says. Gerald Anderson, who is certainly being groomed to be the next Piolo Pascual, can be a bit of a ham sometimes but gosh darn it he's a good looking ham. Sarah, meanwhile, is still pa-cute but this time in the perfect dosage. "She's likable," is how my cousin put it. I never would have pegged him as a Sarah fan but he's quite right. Under the direction of Raz de la Torre, the two young actors are allowed to shine in the most flattering light.The director also coaxes pitch perfect performances from supporting actors like Joey de Leon as the aging rock star dad and Jon "Sweet" Lapus as the funny and understanding co-worker, and even Meagan Young as the spoiled, rich, and beautiful girlfriend.

My congratulations to Raz de la Torre, who has managed to pull off the trickiest trick of all: how to do a rom com that works even without a big kiss. It's a tough job but someone has to do it. It's easy to entertain a captive audience with popular stars and formulaic plots. But it's hard to convince jaded thirty-something spinsters that true love happens. For a couple of hour today, I knew it to be true. Maybe that's why I love watching movies.

For fans of the original song. Sing it, Karen.

See where this movie is showing.

I Love Cheese Balls: Won’t Last A Day Without You Rialimjap Iwon’tlastadaywithoutyoumovie Sarahgeronimo Geraldanderson
Your Guide to Thriving in This Strange New World
Staying
In? What to watch, what to eat, and where to shop from home
OR
Heading
Out? What you need to know to stay safe when heading out