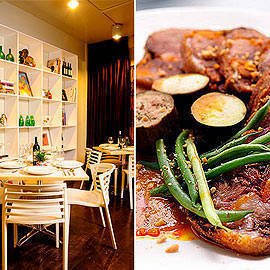 CHECK IT OUT: Villa Cafe in Makati

This establishment is closed. 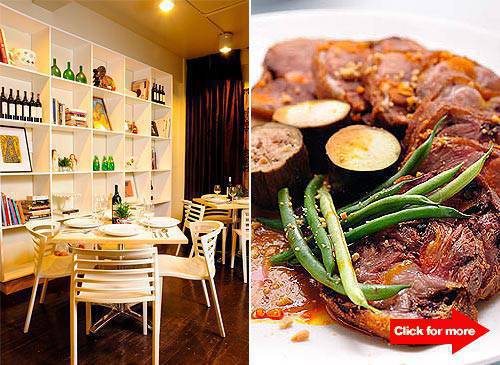 (SPOT.ph) If you're taking balikbayan guests or foreigners out to dinner in hopes of (re)acquainting them with the virtues of Filipino cooking, try Villa Café. Yes, it's Kapampangan cuisine, but then again not entirely. In this case that's a good thing. With chefs Sau del Rosario and Jam Melchor-both of whom hail from Angeles City-manning this cozy outpost along Yakal Street, you'd be right to expect food that tiptoes between the reassuringly familiar and the cleverly concocted. "This for me is authentic Kapampangan cooking. How it's done in my house, the way my grandmother still does it," explains Melchor. He confesses however that that's not always enough these days. "Ask people what their favorite food is and they say Japanese or Italian. Nobody says, 'I like food in a palayok (clay pot).' That's why we've opted to re-make the recipes with a modern personal touch."

Do you like garlicky snails (P280) cooked in chilies and capers? Here, the usual suso comes de-shelled in chewy, rubbery bits in a pot covered by pasta-like puff pastry. It's a dish that doesn’t lure you at the onset, and then it's suddenly wonderful with unusual but delightful textures melded together, and an assertive Spanish flavor. Then, there's a crispy catfish and mustasa salad (P195) whose leaves double as wrapper for tomatoes, salted egg, onions, and oh yes, buro (fermented rice). This one calls for nimble fingers; expect comedy to ensue for people sharing a plate. It's at once a fitting starter, and in a way, a crash course in the Filipino culinary psyche that's always been infatuated with playing with contrasts.

Del Rosario and Melchor don't shy away either from giving credit where credit's due. The buro along with several other elements is inspired by the recipes of the veteran cooks and homemakers of Pampanga, including Atching Lilian Borromeo.

Villa's homey Rellenong Bangus (P375) does wonders for the Pinoy food fan, too. "We were challenged while making this," adds Melchor. "How else could you serve rellenong bangus other than the usual way that easily falls apart when you dig in?" But here it's creamy, exceptionally flavorful with notable smokiness, and comes served in its own drippings. Carbohydrates be damned, this one begs for white rice. Still hungry? Good. There's a brawny, burly boneless crispy pata that shouldn't be ignored. Peep into the open kitchen and you'll spot slabs of these porkers being prepared. The skin comes crackling, and the meat is stuffed, almost obsessively, with lots of black peppers. Even the string beans it comes with don't escape a makeover, tied together with green, glossy noodles. By itself the crispy pata is fork-tender and juicy. The kare-kare sauce comes as a welcome afterthought that's less thick than usual.

End with two kinds of native chocolate: Either a hot cup of Tsokolate Eh! (P150) with a baby batirol and a San Nicolas biscuit, or the exquisitely moist, homemade Dulce de Tsokolati (P195). Better yet, sample both. You'll be grateful you did.

Villa Cafe Chefsaudelrosario Chef Jam Melchor Kapampaganfood Pinoyfood Filipinofood
Your Guide to Thriving in This Strange New World
Staying
In? What to watch, what to eat, and where to shop from home
OR
Heading
Out? What you need to know to stay safe when heading out