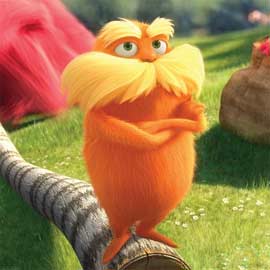 Does this much hyped animated film meet expectations? SPOT.ph movie reviewer Paul Daza clues us in. 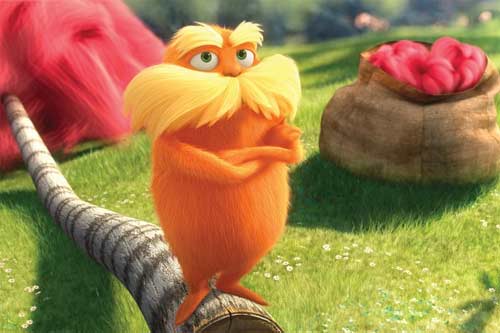 From the same team that gave us the delightfully offbeat Despicable Me now comes The Lorax, another computer-crafted fable that has all the visual panache of its corporate predecessor, but none of its verbal or narrative wit.  The Lorax may have colorful and curvaceous landscapes, cute and cuddly creatures, and cotton candy-like Trufulla trees that are beautiful to behold, but the movie doesn't soar as high or as mightily as it could (and should) have. Though it has an urgent message about protecting Mother Nature, this Dr. Seuss adaptation- a box-office bonanza in the USA- is compromised by story and plot inconsistencies, not to mention an alarmingly passive title character. Is it too much to ask that the Lorax in a movie called The Lorax actually do something to advance the plot? As I overheard a child say at the end of the screening I attended, "The Lorax didn't do anything...it was the boy who did everything."

"The boy" is Ted (voice by Zac Efron), a pre-teen who lives in the pretty but artificial town of Thneedville, where everything- including grass and trees- is made of plastic. And because living trees are only a memory for the residents, they have to pay for the air they breathe. When Ted is told by his crush Audrey (Taylor Swift) that she'll instantly marry the man who can give her a real, living tree, he sets out to become that man. Ted's obsession to give Audrey her heart's desire leads him on a perilous journey out of town to seek the Once-ler (Ed Helms), the man who knows what happened to all the Truffula trees. Over the course of two nights, the Once-ler reveals to Ted that it was he who chopped down the trees in the name of big business many years ago, killing them despite the pleas of a creature called the Lorax (Danny DeVito). After meeting Ted, though, the Once-ler concludes that the boy is the one who can help trees make a comeback. But trouble awaits Ted back in town in the pint-sized shape of O'Hare (Rob Riggle), the all-powerful, all-seeing billionaire who sells the townspeople the air they breathe. Worried that people will no longer buy air from his company if they can get free air from trees, O'Hare is determined to stop Ted from re-introducing Truffula trees to Thneedville by any means necessary. 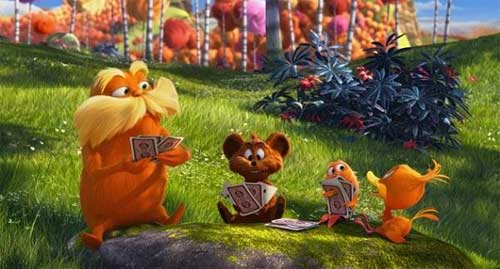 Though the message of The Lorax is that we shouldn't waste Mother Nature's resources, the film itself wastes the talents of the gifted animators who have succeeded in making it the most eye-popping Dr. Seuss big-screen adaptation yet. Whether viewed in Imax 3D or conventional 2D, The Lorax is an eye-gouging, candy-colored treat that's in a class all its own compared to earlier Seuss flicks like The Grinch, The Cat in the Hat, and Horton Hears A Who. If I had to grade The Lorax solely on the quality of the animation, I'd give it 4½ spots out of 5. It stops shy of getting a perfect score only because it made the all-plastic town of Thneedville look inviting and charming, despite the fact that the movie clearly wants us to despise the idea of living in an all-plastic town.

In terms of what it lets us hear, however, the movie doesn't fare as well. The three or four songs which underscore major plot points are merely okay. The dialogue, particularly the lines delivered by the Lorax  who "speaks for the trees" are totally forgettable.  Beyond warning the Once-ler that there'll be trouble if he chops down the Truffulas, there's not much else the Lorax says that's insightful or poignant. Considering how ineffective he is as a spokesperson for our leafy friends, it's no wonder that all the trees in the Truffula Valley were chopped down. Wall-E was a far more effective advocate of botanical protection, and he hardly spoke! 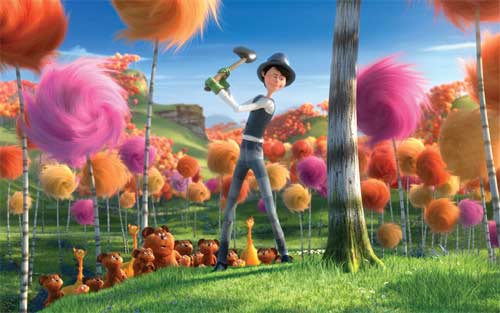 And because the script of The Lorax hardly has anything eloquent or inspiring to say, it also wastes its talented voice cast. When the film ends, you'll be hard-pressed to justify the participation of Zac Efron and Taylor Swift as Ted and Audrey. As two of today's most talented young entertainers, Efron and Swift could surely have given the movie way more than it demanded of them. Even the usually reliable Betty White, as Ted's crafty grandma, is only given one funny punchline.

Adding to the script's problems is the inconsistency of certain details. If everything in Thneedville is made of plastic, for instance, what are the clothes of its citizens made of? The town also has a comic book store. If living trees haven't been seen in a long time, where does the paper for the comic books come from? As for the Once-ler, if he's so eager to redeem himself for chopping down all the Truffula trees when he was young, why does it take him decades to attempt to set things right? 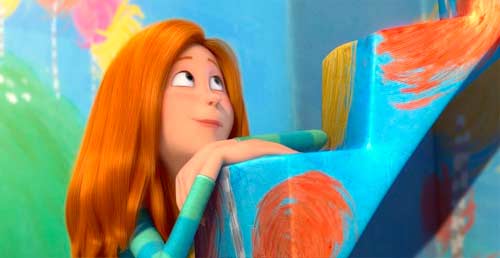 Still, the most problematic element in the film is the Lorax himself, he who magically appears when the Once-ler chops his first tree. If the Lorax has such magical abilities (he can even fly), why can't he use his magic to save his beloved Truffula Valley from being denuded? He can't even open a door without help from the Once-ler! The question about exactly how powerful the Lorax is must have bugged the scriptwriters as well, because there's a scene where the Once-ler asks the Lorax why the latter didn't just use his magic to stop the former from killing all the trees. The Lorax's lame reply? "It just doesn't work that way."

Exactly how "it" does work is never explained, resulting in a visually dazzling movie that's ruined by sloppy and careless scriptwriting.

Movie Review Pauldaza Lorax Thelorax
Your Guide to Thriving in This Strange New World
Staying
In? What to watch, what to eat, and where to shop from home
OR
Heading
Out? What you need to know to stay safe when heading out