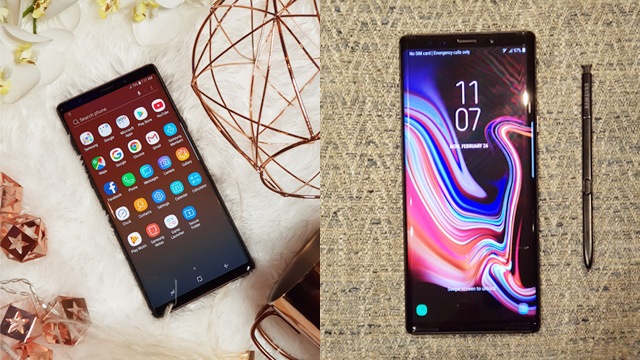 PHOTOS: Your First Look at the Samsung Galaxy Note 9

A brand new, shiny thing to add to your wish list!

(SPOT.ph) We don't blame you if, this early, you're already thinking of what to get yourself for the holidays. If you're considering getting a new gadget, you're in luck because you still have time to save up. And with Samsung having just unveiled some cool new gadgets during the Unpacked event held at Barclays Center in New York City (with the Local Unpacked event in Manila Marriott Hotel, Pasay City) on August 9, 11 p.m. (PST), you might just find yourself adding another item to your wish list.

The star of the show is no other than the Samsung Galaxy Note 9 smartphone. Designed for power users in mind, the Galaxy Note 9 showcases improvements in terms of performance, design, and usability from the previous versions of the Note series.

For starters, it comes with bigger battery (4000 mAh) and storage capacity than its predecessor. The base model offers storage starting at 128 GB, which is more than enough space for all your favorite shows, movies, and photos. There will also be a 512 GB version of the phone to be sold in limited quantities, perfect for those who prefer to keep large files on their phones.

What's the new Note without an S-Pen upgrade? It's still as useful as ever for handy note-taking, but with Bluetooth connectivity thrown into the mix, you can now use the stylus as a remote control. Say goodbye to groupfies in which your head ends up being the biggest—with this option, you can mount the phone on a tripod then use the stylus' button as a remote to take group photos. You can also use the stylus as a clicker for your presentations.

The phone's bright 6.4" screen is a joy to look at and is as immersive as it gets with its Infinity display. Meanwhile, the camera delivers impressive clear images thanks to its dual camera lens, and comes with a bunch of fun features like augmented reality emojis, a feature that can turn your selfie into an animated version (there is also a downloadable pack featuring Disney characters), auto-detection of scenes and lighting conditions, among others, to nail that perfect snapshot.

Design-wise, the phone doesn't deviate from the smartphone build that we are all familiar with; in fact, its form factor is almost the same as its predecessor, the Galaxy Note 8. It comes in a glossy, sleek package with three colors to choose from—Metallic Copper, Ocean Blue (with a Pearl Yellow S-Pen), and Midnight Black.

The Samsung Galaxy Note 9 will be available in late August for P55,990 (128 GB). It is also available for pre-order from August 11 to 19 via authorized Samsung dealers. A lot of exciting freebies await those who pre-order, including a 32-inch Samsung Smart HD TV for those who plan to get the 512 GB version—now how's that for a good deal?

Cell Phone Gadgets Mobile Phone Samsung
Your Guide to Thriving in This Strange New World
Staying
In? What to watch, what to eat, and where to shop from home
OR
Heading
Out? What you need to know to stay safe when heading out