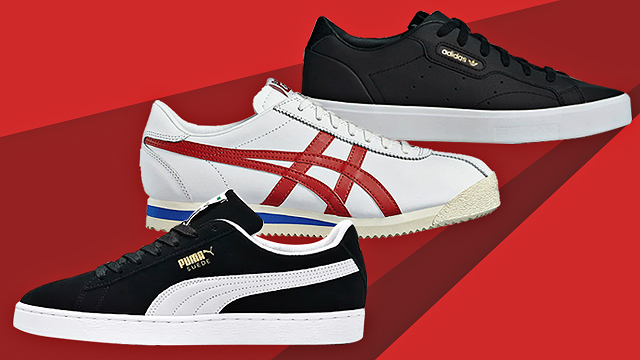 Footwear Feuds: The Startling History Behind Some of the Most Famous Sneaker Brands

Did you know that Adidas and Puma were created by two brothers?

(SPOT.ph) Feuding between competing brands is no new thing; from the soda-induced rivalry of Coke and Pepsi to the storied disputes between Microsoft and Apple. While we’d like to say that business just naturally breeds competition, oftentimes these corporate squabbles can get personal, and such is the case with many sneaker brands. Yes, your beloved comfy kicks may have a dark (or at least, petty) past.

From design pilferage to sibling rivalry, we look back on some of footwear’s most historical disputes:

In art and in design, aesthetic similarity is often unavoidable. Whether purposely copied or born from a concurrent stroke of inspiration, even the most unique idea will often have something resembling it elsewhere. One such parallel exists between Nike’s Cortez and Onitsuka Tiger’s Corsair sneakers.

In the late '50s, Onitsuka Tiger, which had grown in popularity in Japan since its formation in 1949, teamed up with Phil Knight and Bill Bowerman when the latter convinced the company that they would have a market in the United States. Bowerman, at the time, was a legendary running coach for the University of Oregon and Knight was one of his former students. Knight even wrote his Stanford MBA thesis on the marketing of athletics shoes and would later play a hand in the conception of Nike’s legendary Air Max sneakers. Knight ran a distribution company called Blue Ribbon Sports, which both he and Bowerman had invested in. Together, the two were able to get the exclusive distribution rights to Onitsuka Tiger’s innovative running shoes in the States.

True to Bowerman’s instinct, by the late 1960s, Onitsuka’s pairs had grown popular in the U.S. thanks to their stylish look and comfy soles. The original Cortez came about when Bowerman had the idea to create a hybrid of two already existing Onitsuka designs, of which he built a prototype. The Japanese brand liked the idea and immediately put it into production. The shoe was an instant hit.

Unfortunately, the good graces between Onitsuka and Blue Ribbon would not last. Though still working to distribute Tiger shoes in the U.S., by the 1970s, Bowerman and Knight had developed their own sneaker line. Yup, you guessed it—Nike. Part of the pair’s new project was their own version of the Cortez, but with the brand’s soon-to-be signature Swoosh logo in place of Onitsuka’s stripes. The partners’ plan was only discovered when an Onitsuka official visited Blue Ribbon’s L.A. warehouse and discovered the remodeled Cortez shoes in a hidden storeroom. Onitsuka’s Cortez later became known as the Corsair after undergoing some design changes and losing the name to Nike in a court case in 1974. To this day, it is the only sneaker in history to become a best-selling model for two different companies.

Fun fact: The Cortez sneaker was originally meant to be called the “Aztec,” in honor of Mexico, the host city of the 1969 Olympics where the shoe was first released. However, around that same time, competing sneaker brand Adidas released the Azteca Gold sneaker, forcing Onitsuka to opt for a different name. And so the sneaker was given the moniker Cortez, named after Hernán Cortés, the conquistador described by Bowman as “that Spaniard who kicked the sh*t out of the Aztecs.” And speaking of Adidas...

Believe it or not, two of the biggest sneaker brands in the world, Adidas and Puma, came about because of a tiff between siblings—one that would spread across families and generations, lasting over seven decades. In 1919, German brothers Adolf and Rudolf Dassler started a shoe factory together called Gebrüder Dassler (literally, Dassler Brothers), or Geda for short. The business proved quite successful, with its breakthrough coming about in the 1936 Olympic Games in Berlin, where Jesse Owens won four gold medals wearing shoes by the Dasslers. The business carried through all the way until the end of the Second World War.

Geda was abruptly shut down in 1948 when the brothers decided to part ways—both in business and in life. Though the exact details of the split are lost to history (even their grandchildren are believed to not know the full extent of the quarrel), many theories have been formulated: from betrayals to personality conflicts. Rudolf went on to start Puma that same year, while Adolf would create Adidas (a combination of his first and last name) just a year later.

It’s said that the two brothers never spoke again. In fact, the dispute between them was so severe that it divided their hometown Herzogenaurach, where both companies are based. The Bavarian town is now known as the “cradle of the sporting goods industry” with Adidas’ and Puma’s headquarters a mere 10 minutes' walking distance from each other. At the time of the brothers’ falling out, at least one member of each family in Herzogenaurach was employed in either Adidas or Puma, so the dispute was felt across the entire town—a divide that would last decades.

The Dasslers’ heirs from both companies would eventually withdraw from their respective companies in the '90s. It wasn’t until September 2009, over 70 years after the split and long after the Dasslers’ deaths, that the two companies would put their bad blood aside in a friendly game of soccer. The town’s current mayor, German Hacker, who even wore one shoe from each brand in the aforementioned soccer game—grew up in a Puma family and as a child, only donned Puma clothes. He now makes it a point to wear both brands to remain neutral.

Adidas Puma Nike Onitsuka Tiger Nike Cortez Onitsuka Tiger Corsair Sneakers History Shopping
Your Guide to Thriving in This Strange New World
Staying
In? What to watch, what to eat, and where to shop from home
OR
Heading
Out? What you need to know to stay safe when heading out