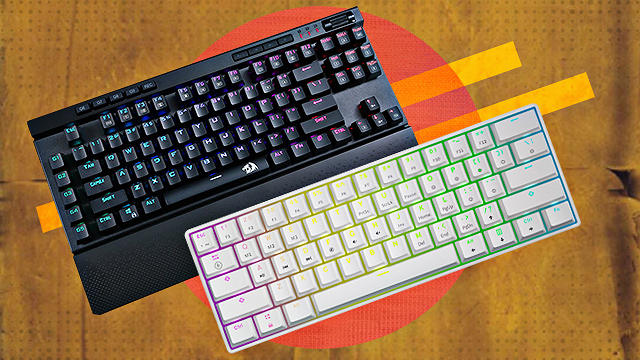 Tap Away: All About Mechanical Keyboards

If you don't like the mushy feel of most keyboards!

(SPOT.ph) The computer keyboard is often the most used input device for laptop or desktop computer users. Next to a mouse, this input setup has been mostly unchanged since personal computers were introduced. Those who have been using computers since the '80s may notice the return of a staple PC peripheral: the mechanical keyboards.

All About Mechanical Keyboards

Mechanical keyboards offer a lot of advantage over membrane keyboards. The first is positive tactile feedback. This is related to the core technology underneath mechanical keyboards. Each key has an encased spring-enabled mechanical switch. Pressing down on the keycap activates the switch underneath. For the user, there’s a satisfying click that can often be heard and felt.

There are three major types of mechanical switches, which are classified as linear, tactile, or clicky. Linear switches activate when fully pressed. Giving a half press activates a tactile switch while a clicky switch gives a click sound when activated, and there's no need to fully press a click switch to activate it.

The History of Mechanical Keyboards

For those new to mechanical keyboards, you'd often hear the term Cherry MX switch. These types of switches came out during the '80s and were made by a German company called Cherry. The Cherry switch became a standard for a long time with a lot of makers copied the design and mechanism. It became ubiquitous partly because the original patent has already expired, making it easy for other makers to manufacture. The Cherry MX switch and its variants are still the most popular type of mechanical keyboard switch. Other well-known switch makers are Kailh which has the reputation of making quality switches, Logitech, Razer, and SteelSeries. Logitech also makes Romer-G switches in partnership with well-known Japanese maker Omron.

Compared to a membrane keyboard, mechanical keyboards have a reputation for their robust build and durability. A keyboard with a Cherry MX switch can last from anywhere to 50 to 100 million keypresses or actuations. Membrane keyboards usually have a lifespan of 5 to 10 million.

If a part of a membrane keyboard gets damaged, the entire assembly may need to be replaced. With mechanical keyboards, individual keys can be detached and easily replaced. The keycaps on top of the switches can also be removed if they are worn out or if the user wants a more customized look with specially-colored keys. This alone makes mechanical keyboards extremely configurable. Most mechanical keyboards also have programmable RGB lighting and key customization.

Membrane keyboards have a hard time detecting which key is pressed when keys are pressed simultaneously. In mechanical keyboards, every keypress is registered even if they are pressed at the same time. This feature, called rollover, is especially useful in games where multiple keys need to be pressed.

Most mechanical keyboards are connected to computers via USB but there are also wireless models. For those just using it in a home or office setting, the wired keyboards are highly recommended.

Which Mechanical Keyboard to Get

In terms of price, mechanical keyboards cost more than the vanilla membrane keyboards but because of their durability and ease of switch replacements, they are a worthwhile investment.

The MSI Vigor GK50 (P3,599) is a low-profile mechanical gaming keyboard with a sleek futuristic look. Those looking for a splash of color can check out the HK Gaming GK61 (P2,390) mechanical keyboard, which has multiple backlit mode and hotswappable switches.

Gundam fans may want to pick up the Asus ROG Strix Scope TKL Gundam Edition mechanical keyboard for P5,795. It comes with a stealth key that can hide apps and mute audio with one keypress. Meanwhile, the Razer BlackWidow Lite is a silent mechanical keyboard with ultra-cool aesthetics that retails for P4,750.

Mechanical Keyboards Adventurer Savvy Seasoned Gadgets Staying In Con-00263 Tech Keyboards Greener
Your Guide to Thriving in This Strange New World
Staying
In? What to watch, what to eat, and where to shop from home
OR
Heading
Out? What you need to know to stay safe when heading out