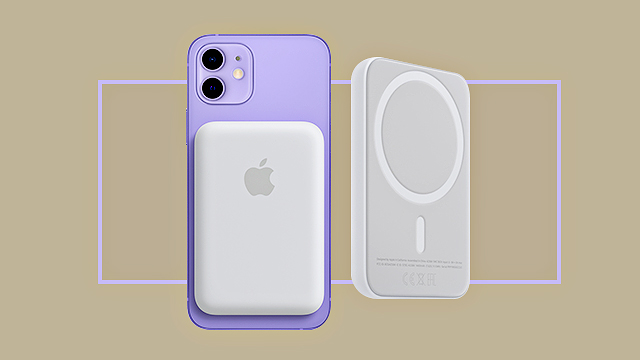 For now, it's only compatible with the iPhone 12 series.

(SPOT.ph) Dedicated Apple users know that the brand's various devices are always made to work best in conjunction with one another. Most people who own an iPhone, for example, likely also gravitate towards MacBooks, iMacs, Apple Watches, AirPods, and the like. To add to their ever-growing ecosystem, Apple is releasing the MagSafe Battery Pack, a portable power bank that makes use of wireless charging.

Here's everything you need to know about Apple's MagSafe Battery Pack:

Though most power banks offer a USB port for on-the-go charging, Apple’s MagSafe Battery Pack only makes use of wireless charging technology. All you have to do is attach it to the back of your phone—the MagSafe technology makes the device attach to your smartphone by way of magnetic attraction—and your phone will begin charging.

MacRumors has noted that the device offers 1,460 mAh of power (about one full charge for the iPhone 12 Mini and partial charge for the larger iPhone 12 models), which is relatively small compared to most portable chargers on the market in its price range. However, since the device is made to work specifically with iPhones, it will offer faster charging that doesn’t disrupt your phone’s other functions and even optimizes the Battery Pack to work efficiently under various external conditions (like heat) and prevent overcharging.

The MagSafe Battery Pack can be charged with Apple's lightning charger, but doesn't come with its own charger or power adapter when purchased. However, iPhone users will be pleased to know that you will often only need one charger for both your phone and the Battery Pack. If either your phone or the MagSafe Battery Pack are plugged to a charging cable and power adapter while attached to one another, the lightning cable will charge both at the same time, so long as as long as the adapter is compatible with USB-C lightning chargers and offers at least 20W of power (You can purchase 20W power adapters from Apple, starting at P1,190).

The Verge has noted that the ability of the iPhone 12 series to share power with the MagSafe Battery Pack reveals a hidden feature of the smartphone, which is that it can act as an output charging source. Potentially, that may mean that in the future, other Apple products that support MagSafe technology (like Apple Watches or AirPods with wireless charging cases) could be able to use the iPhone 12 series (or models released after it) as a portable power bank for Apple accessories.

The MagSafe Battery Pack is now available on the Apple U.S. website for U.S. $99 (roughly P4,974.70) with the first batch of orders expected to be delivered by July 19. No official Philippine price or release date has been announced.

Apple Shopping Staying In Heading Out Savvy Adventurer Seasoned Magsafe Battery Pack Power Banks Topspot Shopping Gadgets
Your Guide to Thriving in This Strange New World
Staying
In? What to watch, what to eat, and where to shop from home
OR
Heading
Out? What you need to know to stay safe when heading out