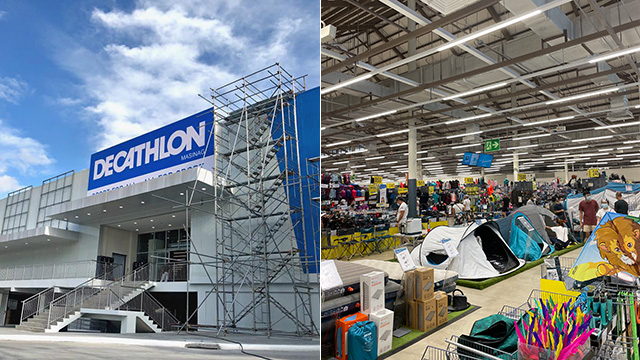 This Is Not a Drill: Decathlon Is Opening Two New Stores in Metro Manila

(SPOT.ph) Anyone who loves budget-friendly, bang-for-your-buck finds knows that sporting-goods store Decathlon is the place to go if you need anything related to physical activity, but don't want to overspend. It's a one-stop shop for all kinds of exercise and outdoor-hobby essentials, so it's a convenient spot to drop by if you need a wide variety of equipment. As of writing, they have three branches in the Philippines in Pasig City, Alabang, and Masinag. In case these are a little too far for you to hit up on the regular, then we have some exciting news: Decathlon is opening two new stores in Metro Manila!

That's right, north folks—you can now shop Decathlon without having to drive too far! The sporting-goods store first teased the opening of their SM North EDSA branch with a Facebook post uploaded on August 28. Though they had yet to reveal the official location, several commenters were quick to figure out where the outpost would be.

While customers were already excited to hear about the upcoming QC branch, Decathlon surprised everyone when they announced another store opening through a teaser posted the day after! This time around, the guesses and speculations in the comments section were mixed. On August 30, Decathlon finally confirmed both locations of their upcoming outposts with the second being at SM Mall of Asia in Pasay City. No official opening dates have been announced for either branch, but we already can’t wait!

While we sit and imagine the possibilities of what Decathlon's upcoming stores will look like, here's a peek inside some of their current branches just to get you excited:

For now, you can shop Decathlon at their stores in Pasig, Alabang, and Masinag as well as on their website.

Shopping Savvy Adventurer Seasoned Heading Out Sm Mall Of Asia Sm North Edsa Decathlon Store Opening Quezon City Pasay
Your Guide to Thriving in This Strange New World
Staying
In? What to watch, what to eat, and where to shop from home
OR
Heading
Out? What you need to know to stay safe when heading out